"Return to the safehouse and wait for Keegan."
— Mission Description

"Sin City" is the fourteenth campaign mission of Call of Duty: Ghosts. The mission is set in Las Vegas, and sees the Ghosts regroup after destroying the Federation's weapon factory, but are ambushed and sedated by the Federation. This mission also sees the death of Elias Walker at the hands of Rorke, fueling Logan and Hesh's hatred and revenge towards him. As Hesh is about to be executed, Keegan comes to the rescue and aids Logan, Hesh, and Merrick in fighting the Federation forces off to escape from Las Vegas.

Arriving at the safehouse in Las Vegas, Elias, Merrick, Hesh and Logan regroup at the casino with their Remington R5's. Getting prepared, the four are sedated by the Federation with tear gas as Riley hides. Logan drifts between consciousness as Merrick is heard being tortured. Awakening, Rorke appears as the Walker family are tied in a room. Rorke asks for Keegan's location but Elias won't give, and Rorke replies "Maybe I can change your mind". Rorke shoots Logan with his MP-443 Grach, wounded, Rorke taunts Elias with the ability to "save his own ass by letting his own men die". Elias tells Rorke that he was never a Ghost, Rorke beats Elias, telling him that he and his sons are nothing. Logan slips out of his ropes and attempts to overpower Rorke, but not enough. Elias can be wounded during the struggle. To avoid Elias getting shot rapidly hit the action button and Elias will avoid being wounded by Rorke. After the struggle Rorke hits Logan with the butt of his gun, stunning him. Rorke shoots Elias three times and overturns him as Hesh furiously screams that he will kill Rorke and insults him. Rorke then slams Logan's face with his pistol and kicking his and Elias' chair. Elias tells Logan that that he is proud of him and everything will be okay. Rorke puts his boot on Elias' head and tells him that he is not a ghost, he's the "man that hunts them and sends them back to the other side". Rorke then proceeds to shoot Elias in the head, off screen, killing him.

Some time later, Merrick, Hesh and Logan are surrounded by Federation soldiers; one tells the other that Rorke wants Logan ("the youngest one") alive. The soldier points his P226 to Hesh's head, but is shot by Keegan via sniper fire. Merrick and Hesh fight Federation soldiers, taking their rifles while Logan can take the P226 or any other weapon. Hesh contacts Keegan and tells him to make it their way, and Keegan says they'll meet in the kitchen. Hesh attacks a room full of Fed soldiers, upon finished the room, Hesh takes a Federation talkey, some heard the noise and are coming. Keegan contacts them and tells them they're too many, making it to the kitchen, Merrick falls on the ground in the kitchen (with his broken ribs). Grouping with Keegan, the four hide in a room. One soldier sees Hesh and comes into the room, Keegan kills him silently as the other soldiers still look for the four. Going though the casino, Rorke comes on the comms though the casino, telling them he wants Merrick, Hesh and Logan dead or alive. Fighting their way though Federation soldiers, the four make it to the exit. Fed soldiers throw more tear gas, the four make their way to a window and jump out, Logan catches a bar but lets go and falls unconscious. Keegan helps Logan up as Merrick tells them to take it slow and they're going to be outnumbered. Hesh sees Riley get shot and the four fight their way, Hesh tells them not to forget Riley, Logan picks Riley up as the four fight their way to extraction.

Rorke speaking to a wounded Elias. 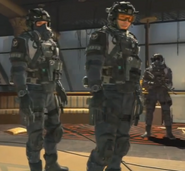 Federation soldiers seen in the mission.

Hesh, Merrick, and Logan in captivity. 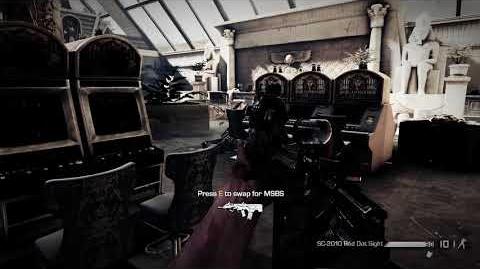