"An alien craft has crash-landed beneath Mt. Rushmore, USA, making for an awesome medium-to-large sized three-lane map littered with extraterrestrial debris. Gain a competitive edge by earning the map-based scorestreak to open an alien spore that enhances your perks and exo abilities."
— Official Description

Site 244 is a multiplayer map featured in Call of Duty: Advanced Warfare that was released in the Ascendance downloadable content pack. It takes place at an alien spaceship that crash landed below Mount Rushmore.

Site 244 is one of the largest maps in Call of Duty: Advanced Warfare. It is set around a crashed alien spacecraft at Mount Rushmore. Due to the map's size, long to medium ranged weapons such Sniper Rifles, Assault Rifles and some Heavy Weapons reign supreme. The extraterrestrial debris creates a three-lane layout, having multiple ways for the player to traverse the map. The design of Site 244 give the players a variety of advantages, such as flanking points and cover. The ship walls and mechanical parts can serve as grappling points for players in the Grapple Playlist.

Both aerial and ground-based Scorestreaks are well suited for Site 244, as rock formations in the map can be used for cover and denfensive positions, giving the player the upper hand in objective-based gamemodes such as Hardpoint. 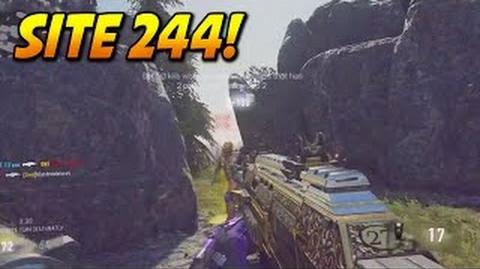