The Slash N' Burn (referred to as Fire Axe in the game files) is a Legendary melee weapon introduced in Call of Duty: Black Ops III as part of the May 6, 2016 update. It is a two handed axe that kills players and bots in one hit.

Slash N' Burn can be acquired in Gorod Krovi by completing the time trial in which the player has to finish 15 rounds in under 24 minutes. The weapon can be picked up from the bulletin board inside the Operations Center. It will kill zombies in one hit until round 25. 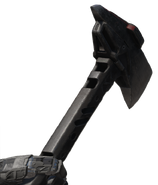 Picking up the Slash N' Burn