Snowmobiles appear in the Special Ops missions "Time Trial" and "Race". In these missions, the player can get a 'Quick Start!' which allows them to start slightly earlier than normal and gives the Snowmobile a short burst of speed.

In the Collection 1 content collection, the Snowmobile appears in the Special Ops mission "Black Ice" where one player drives the Snowmobile and the second player shoots from behind with Akimbo FMG9s and an ACR 6.8. However, if on solo, the player driving will receive a G18, much like in Modern Warfare 2.

The Snowmobile appears in the multiplayer map Whiteout and in the mission "Clockwork".

In Call of Duty: Advanced Warfare the Snowmobile appears loaded in the memory for Aftermath under the name "vehicle_jetbike". From the lack of treads and other details it is likely it was used to test the Hoverbike's physics and scripting before the model was complete.

The Snowmobile returns in Call of Duty: Black Ops Cold War as an operable vehicle on Crossroads and Alpine maps.

The Snowmobile returns in Call of Duty: Mobile appearing exclusively in the season 13 Wint3r War Comics. Used by Ghost to travel to the Soviet base Adler told him about. After his encounter with Makarov, it is destroyed by Templar. 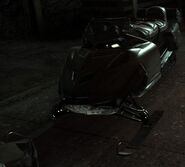 A Snowmobile in Modern Warfare 3. 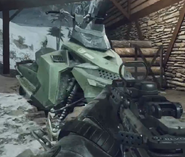 The snowmobile behind Ghost.

The Snowmobile is destroyed by Templar.