The snub-nosed Python makes an appearance in the singleplayer mission "Payback," when Woods and Mason are forced to play Russian Roulette. Mason uses this revolver to kill the Viet Cong Bookie and takes his CZ75, but does not keep the Python, presumably because it only contained one round in the first place. 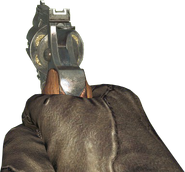 A snub-nosed Python in first person

Four snub-nosed Pythons appear in the opening cutscene for Mob of the Dead. Billy Handsome is first seen with them, giving them out to the other mobsters, claiming to have stolen it from the warden's private collection. The mobsters use the Snub Nose Python's briefly afterwards to kill an undead Stanley Ferguson, although using a hefty amount of ammunition to do so.

The .357 Snub Nose appears as a barrel attachment for the .357 handgun in Call of Duty: Modern Warfare.