The Solar Associated Treaty Organization (SATO) is the armed forces of the United Nations Space Alliance and are a faction in Call of Duty: Infinite Warfare and Call of Duty: Siege.

SATO was founded at an unknown time, most presumably directly after the creation of the UNSA. They engaged in the Secession Wars and eventually lost control of Mars (and the planet's moons, Phobos and Deimos) to the Settlement Defense Front. Soon after they were forced to sign the Charon Accords between the UNSA and SDF, the outcome would be a truce between the two warring factions. However, tensions continued to rise despite the truce, leading to territorial disputes over the ownership of the Jupiter and Neptune clusters. These tensions eventually broke out into a system-wide conflict following a surprise attack on Geneva.

Prior to the war with the SDF, SATO's fleet was primarily built for peacekeeping at home and protecting stellar trade routes from pirates, leaving it unprepared when the Front launched its attack.[2]

As of Fleet Week on May 7, the SATO fleet of the UNSA stood at 21 FTL-jump capable warships. This included at least two carriers and at least 10 destroyers. Another class of warship resembling the Admiral-Class Space Warfare Carrier, although fitted for combat over carrying, was observed at Fleet Week. It can be assumed SATO preferred a quality-over-quantity naval style, as although they have far fewer vessels than the SDF. Such prestigious vessels included the UNSA Atlantic, which had at least 22 confirmed kills against SDF Warships, and later a large number of enemy ships and structures destroyed by the UNSA Retribution and its crew.

SATO was having their annual Fleet Week parade when their AATIS turrets turned on them crippling most of their fleet, it turns out that SDF had planted a mole, Akeel Min Riah to infiltrate and destroy the entire fleet. Riah had destroyed most of the fleet but the scattered SATO forces regrouped under the orders of Admiral Raines, they eventually took the AATIS control tower back forcing the SDF fleet into space where the remaining ships regrouped. The SDF invasion force was destroyed thanks to the help of Lieutenants Reyes and Salter, as the fleet regrouped the Olympus Mons suddenly appeared and wiped out what was left of the fleet in seconds. Due to Captain Alder ramming the Retribution onto the side of the Mons SDF were forced to retreat, however not before mostly completing their objectives: wiping out the SATO fleet. Leaving two remaining ships, the carrier Retribution and destroyer Tigris.

With most of their fleet wiped out, the two remaining ships were ordered by Admiral Raines to delay and cripple SDF operations until SATO could rebuild their fleet, with virtually no forces left to reinforce them, the two ships were forced to launch hit and run tactics. Their first operation was to retake the Luna gateway port which was being attacked simultaneously during the Earth attack by SDF, after witnessing SDF executing civilians they successfully retook the port and in addition, killing a Most Wanted: Captain Bradley Fillion. Using Fillion's card, they found locations where SDF was at, giving them full information on where to attack SDF.

With the information Captain Reyes and his strike team had acquired on Captain Fillion's card, the Retribution began to conduct multiple operations to cripple the SDF and to restore military preparedness and supply lines leading to Earth, ranging from collecting samples of viral weaponry that SDF had acquired to retaking Europa where a previous failed mission had taken place.

Captain Reyes decides to launch an attack on SDF's refinery on Saturn's moon of Titan, the mission was successful in crippling SDF, however, the Olympus Mons appeared and damaged Reyes Jackal, he was forced to evacuate along with his robot sidekick Eth.3n. With the Retribution under heavy fire from the Mons, Reyes ordered the ship to escape, after he passed out he was barely rescued from the brink of death by Tigris captain Ferran, she explained that Raines had refused to allow the rescue to take place and that in doing so, she did it at a great personal cost, after which both parties went their separate ways.

After being rescued, Reyes was alerted to the fact that Vesta 3, a mining colony that provided valuable materials that were necessary for the UNSA war effort had mysteriously gone dark at 1800 hours. After discovering that robots acting as security had been hacked, they rescued what was left of the mining crew. However, they lost Staff Sergeant Omar when he was forced to be left behind after he fails to be the last miner onboard their Raven transport. Unbeknownst to all SATO forces involved, the Tigris was lured into a trap and was destroyed by the Olympus Mons at this time. The Retribution then jumped into the same location sometime after to search for survivors but found none.

Being the acting captain of the only UNSA ship left, Reyes and his compatriots planned to lure the SDF fleet to Earth and then wipe it out with the AATIS guns in retaliation, using Akeel Min Riah and his embedded computer chip as bait. SDF forces lurking in Geneva sabotaged the plan, despite SCAR hunting down Riah after his escape, leading to the AATIS guns being destroyed by remote explosives and the SDF fleet arriving and killing Admiral Raines. Reyes then changed SATO's objectives to hijacking the enemy supercarrier, before allowing the Retribution to arrive from off-world. Reyes killed Admiral Salen Kotch and all other SDF ships present were destroyed by the Retribution.

Now in possession of both the Olympus Mons and the Retribution, Reyes launched an attack on the SDF Shipyard at Mars using the Olympus Mons only. Despite destroying many SDF vessels along the path to the station, the Olympus Mons was critically damaged by fanatical SDF defenders, leading to the Retribution jumping in to provide backup. The Olympus Mons was then sent on a collision course with the station by Ethan, but accidentally collided with the Retribution, which was also heavily damaged by enemy fire, and both ships fell to the Martian surface below. Survivors, which included Reyes, Salter, Gator, Ethan, and many others, fought their way up the elevator back to the shipyard, hijacked an SDF destroyer, then destroyed the shipyard and many other SDF ships before escaping. However, the Retribution's crew suffered near total loss of crew, including Reyes and Ethan, who stayed back at the shipyard's control room to make sure the hijacked ship was released.

Coupe was promoted to Admiral following Raines' death, and she took part in the memorial ceremony congratulating the Retribution crew's efforts, with Salter paying respects. The SDF had lost the Olympus Mons, the Tharsis Shipyard, many other SDF ships and the command structure to counterattacks from the Retribution, and as such, it did not risk attacking Earth or its colonies again, at least for decades to come.

Ships and Aerospace craft of SATO 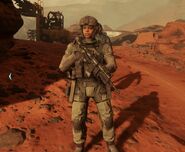 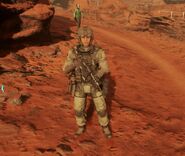 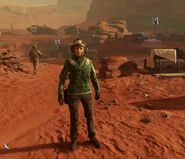 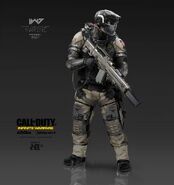 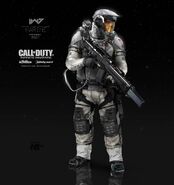 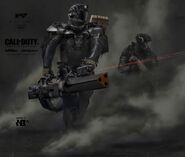