In Spaceland, recover the piece of the Soul Key.

Sooooul Key is an achievement/trophy in Call of Duty: Infinite Warfare. It requires the player to recover the piece of the Soul Key. It is the main easter egg achievement in the zombies map Zombies in Spaceland. It can be achieved in either solo or co-op.

Once the player has activated all of the teleporters and has gone to the Pack-a-Punch room to activate the UFO discs, the player must assemble the three pieces of the Seti-Com. Each piece can spawn in three different locations.

Once all three pieces are collected, bring them over to David Hasselhoff, who will give the player the complete Seti-Com.

When the player puts the Seti-Com in place, a countdown will appear above the Seti-Com, representing how much time the player has to defend it from the zombies. The first defend will take a minute, the second defend will take a minute and thirty seconds and the last defend will take two minutes. If zombies damage the device too much, it will be destroyed. In that case, the player will have to go to David Hasselhoff and get another Seti-Com and repeat the process again. A Brute will also spawn for each time a defense is failed. Only one defend can be done per round, meaning the player can only do one on their current round and the next on the next round. Every time the player completes one of the defends, a Max Ammo will spawn nearby for the player to pick up. Once all three have been completed, bring the device back to David Hasselhoff. The player must now wait around two rounds before the next step can be done.

NOTE: This step varies on solo and co-op.

After two rounds, return to David Hasselhoff and he will give the player a Speaker. Place the Speaker on the four golden circles around the main teleporter. Interact with one of the speakers. This will cause the UFO stuck in the side of Polar Peak to break free and hover above the teleporter. In co-op, each player must interact with one speaker at the same time.

Each speaker will be a different color and the player(s) must interact with each speaker in the color order the UFO flashes. This can only be done as soon as the speakers glow a white light. If done correctly, the UFO will blink for a while, and the next zombie killed will drop a Max Ammo. Repeat the process twice. If the players interact with the speakers too late, or in the wrong order, Wyler can be heard laughing, and a Brute will spawn.

After 3 successful interactions, several clowns will spawn. Once they are dealt with, up to four aliens will spawn in front of the teleporter (one for each player). The player(s) must shoot the alien(s) until they eventually crouch on the ground to recover. Each alien's health is indicated by their neck collar, which goes from green (full health) to yellow (half health) to red (critical health). When an alien crouches, the player must melee the alien in the back, causing an Alien Fuse to drop. The alien(s) will rise, and the player(s) must repeat the process. The next zombie killed afterward shall also drop a Max Ammo. If the player does not melee the alien in time, he will fully heal and the player will have to redo the process without a Max Ammo. After knocking two fuses off all of the active alien(s), the last phase of the battle shall trigger, which consists of simply shooting the alien(s) enough times, until it is killed, sending out a nuke which kills all of the zombies, rewarding the player with a 1000XP with each alien kill. The two Alien Fuses can be picked up and placed in the Pack-a-Punch Machine, allowing the player to double Pack-a-Punch all regular weapons, and Pack-a-Punch the four Weapons of Rock. Before placing the fuse, it is advised that all players are equipped with perks for the final step.

Once the fuses are placed, make sure the player(s) have at least one Pack-a-Punched Weapon of Rock. After the fuses are placed, the UFO will shoot lightning bolts at any players near the junction area. The player with a packed Weapon of Rock must shoot the five blue glowing lights around the main Spaceland sign. The player must shoot the last one when the UFO is directly above the teleporter. Once shot, it will send out a beam of energy, destroying the UFO and dropping a piece of the Soul Key. Picking up will award the player with the achievement. 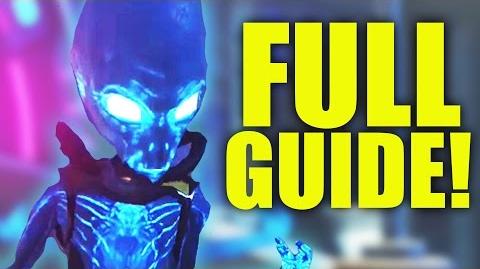