Sophia is Doctor Ludvig Maxis' assistant. Sophia was first mentioned in one of the radio messages hidden in an underground tunnel in Der Riese.

Sophia was Doctor Maxis's personal assistant, and was tasked with delivering a letter to the Reichstag High Command sometime before the events of Der Riese.

In Revelations it is revealed that Sophia was attacked by subject 2-6 and possibly infected. In a radio it is also revealed that she was presumably killed or poisoned by Dr. Maxis. After the death of subject 2-6 Sophia was called for by Dr. Maxis for questioning. Maxis sits her down and insists she drink her tea, Maxis asks her to show him her arm however Sophia refuses. Maxis calms her down and tells Sophia that he would never hurt her. Suddenly Sophia begins to cough and drops her cup where she can be heard falling to the ground and moaning in pain. Maxis reassures Sophia that everything he is about to do is for her own good.

In Call of Duty: Black Ops III, she is mentioned in a cipher that reads "SOPHIA- Cyclic reduncy check = FAIL".

Though she sounds like a human being in her directive logs in Gorod Krovi, it is revealed that she is, in fact, an artificial intelligence calling itself S.O.P.H.I.A. (standing for Strategic Operations Planning Heuristic Intelligence Analyzer).

The characters are instructed by S.O.P.H.I.A. to perform various tasks to initiate Ascension Protocol so they can in return receive a power core to repair Nikolai's mech suit. These tasks include retrieving Gersh for her to extract information from him, escorting a malfunctioning Russian Mangler and Valkyrie Drone for her to analyze, retrieving information from a fallen Groph module, terminating a self destruct sequence, and downloading information on interdimensional travel.

Once the tasks are finished and Ascension protocol is complete S.O.P.H.I.A dislodges from her normal position and departs the map in search of Maxis. Her fate is left unknown.

Sophia is heard in a few audio recordings on the map, Revelations, one of which discusses a failed attempt by Maxis to pacify zombies. It is also revealed in this audio recording that Sophia was attacked by the zombified subject 2-6 and presumably infected.

"After weeks of failure and frustration, Dr. Maxis finally achieved the breakthrough he had been searching for. The results were immediate and startling. In the case of subject two-six, his instances of violent outbursts were nonexistent. His docility appeared.. permanent. Unfortunately, while we prepared to implement the treatment on the other subjects, there was.. incident. During his field tests this morning, subject two-six attacked a handler. Two-six and the handler were both destroyed. Maxis believed subject two-six only attacked the handler. He does not know I was attacked as well. I have observed a developing pattern of high fevers and cold sweats. My thoughts are erratic. My relationship with Ludvig is complicated. I fear I cannot keep this secret from him for long..."
— Sophia's audio log in Revelations (map).

In another radio, it is discovered that Maxis had become aware of what Sophia was hiding and eventually managed to knock her out. In order to save her life, Maxis was forced to convert Sophia into the Strategic Operations Planning Heuristic Intelligence Analyzer, or S.O.P.H.I.A for short.

Sophia appears unnamed in issue 3 of the Zombies comic series, as part of the security system protecting Zero Base. When Marlton Johnson attempts to crack the system, Sophia enables security measures to trap the group. She constantly attempts to thwart the four "intruders" by leading the zombie horde toward them, and setting death traps for Marlton. Eventually Marlton reaches the primary control room, where he presumably disables Sophia by using an axe to destroy the system. 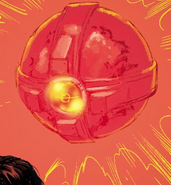 Sophia as she appears in the Call of Duty: Zombies comic.