"Warning, re-entry detected. All security personnel on high alert."
— Ascension announcer at the beginning of a Space Monkey round

Space Monkeys are an enemy exclusively appearing the map Ascension, and are also mentioned in Tag der Toten through a radio.[1] They occur every four to five rounds after a perk has been bought. They steal the players' perks in the form of attacking the various perk machines, and can also damage and kill the player. They replace Hellhounds and the Pentagon Thief. They wear space suits similar to the ones worn by regular zombies, and are likely zombified primates from the Soviet Space Program.

The Space Monkeys will attack a perk machine until the player loses their perk. Perk Machines have 100 HP and monkeys inflict one damage on the machine if players are far from the machine, and eight if the players are close up. Once the machine has been disabled, the player must re-buy the perk. The last Space Monkey, upon death, will drop a Max Ammo, and also a Random Perk Bottle if the players successfully kill all monkeys without having any machines damaged. It should be noted that if the player has obtained a perk from the Random Perk Bottle and have not opened the area in which the Perk-a-Cola is located, the Space Monkeys will not attack that perk machine. Monkeys have two different attacks: close range which is strong, and long range which will cause the player to become dazed and weakened, though if the player is in the air when the monkey uses this attack, they will be unaffected. They can also throw back grenades. Once a monkey has taken out a perk machine, any monkeys involved in breaking it do not appear to be able to break any other perk machines and will exclusively target players. If the player(s) then use any means to make themselves undetectable, through GobbleGum or other means, the monkeys will act like any other zombies and run to a random location, if a player walks near them in this state, they may still perform the slam attack, and damage the player.

When the monkey round occurs, the player will hear a buzzer in the beginning of the round, and the map will turn in a yellow-orange tint. Also, the announcer will warn the player by saying "Warning. Re-entry detected. All security personnel on high alert." The monkeys arrive in lunar landers crashing onto the ground. When the round finishes, the announcer will say "Security level normalized. System defenses offline."

It can be assumed that they are related in some way to Yuri Zavoyski due to an excerpt from his rant in the second radio message, "My intellect is ill served blasting a bunch of monkeys into the atmosphere!". It can also be assumed that they have been exposed to Element 115, due to their glowing red eyes and increased physical capabilities.

) - Kill a Space monkey with a Fire Pit. 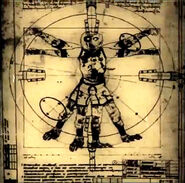 An image of the "Vitruvian Monkey" from GKNOVA6.

A magazine mentioning the Space Monkey.

A group of Space Monkeys in Black Ops Zombies.

A Space Monkey being killed in Black Ops III. Note the purple glow left behind. 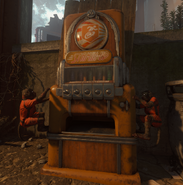 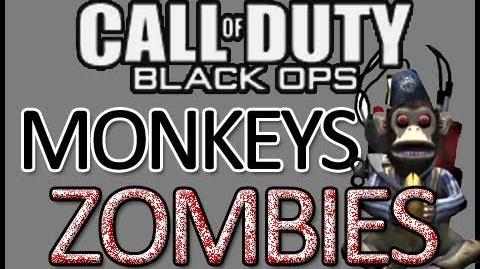