Call of Duty Wiki
Register
Don't have an account?
Sign In
Advertisement
in: Call of Duty: Infinite Warfare Factions

"No ship can't be breached, no target can't be reached"

The Special Combat Air Recon (SCAR) is a faction in Call of Duty: Infinite Warfare.

They are a special ops unit that is part of the SATO Naval Special Operations Task Force of the United Nations Space Alliance. They are especially trained for space-based combat Operations. Nick Reyes and his ship, the Retribution are part of SCAR. SCAR team members can pilot Jackal fighters.

Due to the fact that sound does not travel in a vacuum, which would massively impede battlefield awareness due to being such a foreign environment to human evolution, SCAR team space suits utilize a built-in laser microphone array to measure the vibrations of objects around them and then uses this data to artificially generate sounds to simulate these vibrations, allowing SCAR operators to maintain situational awareness during combat. This also functions as an in-universe explanation for sound during gameplay in a vacuum.[2][3][4] SCAR team space suits utilize mechanical pressurization rather than traditional gas pressurization.[5] 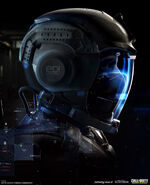