In Black Ops III, each of them has both a unique weapon and a unique ability, but players can only choose one to use during each match.

The chosen weapon or ability becomes usable for a short time after the player fills up their power meter; the power meter is filled up automatically over time, but fills up faster through earning score.

Players also can only use one Specialist per match; Specialist selection is done before starting a match. There are a total of nine Specialists, listed below.

There are four Specialists available from level 1; Donnie "Ruin" Walsh, Alessandra "Outrider" Castillo, David "Prophet" Wilkes and Erin "Battery" Baker. He "Seraph" Zhen-Zhen is unlocked at level 22, Tavo "Nomad" Rojas at level 28, Experimental War Robot-115 "Reaper" at level 34, Spectre at level 40, and Krystof "Firebreak" Hejek at level 46. Each can be unlocked by spending an unlock token on either their weapon or ability.

Upon starting multiplayer for the first time a player will be given an unlock token to unlock one of the default four for use, and the game will default to this selection upon prestiging. The last specialist, Danny "Blackjack" Li, can be unlocked via acquiring Mercenary Contracts, by completing Weekly Contracts. Each Mercenary Contract allows the usage of Blackjack for a limited time of one hour per week.

Outside of Specialist abilities and weapons, gameplay is identical for all Specialists. Each Specialist has customizable armor which is purely aesthetic. They each also have unique quotes, sometimes speaking to other Specialists during gameplay or in the beginning of a match.

The lights are located in different areas of each specialist but typically are on ammo pouches, shoulders, knee and elbow guards, and on heads. During gameplay all friendly players will have no lights but enemy players will have lights. When an enemy is killed the lights will turn off which can make it hard to distinguish dead players has hostile or friendly. 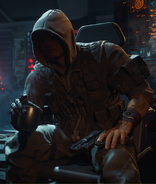 Danny "Blackjack" Li (via completing contracts.)
Add a photo to this gallery

In Black Ops 4, Specialists make their return. Specialists have an ability for equipping and use during a match that recharge. Teams will be limited to one specialist type. There are a total of ten Specialists, listed below.

Throughout the month of October 2018, comic books of the Specialists' origins were released and can be viewed here.

Kerk "Ajax" Rossouw
Add a photo to this gallery

Krystof "Firebreak" Hejek
Add a photo to this gallery

Retrieved from "https://callofduty.fandom.com/wiki/Specialists?oldid=2460435"
Community content is available under CC-BY-SA unless otherwise noted.