Any weapon obtained by the player in Multiplayer.

"You've seen my work. It speaks for itself."
— Spectre's default comment in the Winner's Circle.

"Next to nothing is known about the presumed wet-works Specialist, Spectre. The designation itself is a codename agreed upon by the various agencies that have pooled their intelligence on unsolved assassinations, inferring his or her existence based on either evidence found at the scene or from fragmentary reports given by shaken bystanders. Despite heavy redaction, all accounts suggest an individual capable of extraordinary stealth, able to evade or neutralize the most sophisticated of manned or automated security set-ups. In every case, Spectre’s victims have been ‘handled’ with surgically precise mid-line wounds with rarely any signs of struggle."
— Spectre's biography

Spectre is a free agent that is often hired to assassinate high-ranking officers. Spectre's real name, date and place of birth, and even gender are unknown to the public, thus shrouding their past in mystery; however, it is shown that they are privy to Reaper's existence as a prototype, and relish in being a free agent, sharing the joy of freedom on the battlefield with Firebreak. Spectre is meticulous when it comes to receiving a liquidation order, often comparing the battlefield to a game of chess, and is willing to succeed by any means necessary, even if it requires the sacrifice of many lives. On the battlefield, Spectre takes pleasure in the act of killing, and shows a degree of cockiness, openly calling even their teammates amateurs, but maintains a calm demeanor when their team loses or the battle ends in a draw, confident that victory will eventually be achieved.

Most of the other Specialists do not appreciate Spectre's presence on the battlefield, even when on the same side, due to their mysterious background and hidden intentions. They are occasionally berated for being a lone wolf and not strictly fighting for their faction's goals (by Outrider, Ruin, and Seraph), and are particularly disliked by Ruin and Battery, who were once nearly killed during one of Spectre's missions. Conversely, Spectre only outwardly shows disdain for Ruin for his straightforwardness in fighting, and is willing to encourage other Specialists or give them advice.

Spectre: "Things are very rarely entirely as they seem. The key is to try to grasp the bigger picture. To understand the larger forces in play. Work out what their goals and endgames might be. Only when you understand this does the pattern and the larger picture emerge. For example, liquidation order 821-16. High ranking CDP military officer. Commander of an elite rapid deployment unit. Likes to get his hands dirty only when high kill counts are statistically likely. When non-operational, client remains in central command facility. Well defended...hard to infiltrate...untouchable. My third party was calling for target elimination at the earliest opportunity. How should I go about achieving my kill?"

Ruin: "All due respect, Sir. I gotta ask why that action was authorized. Gamma and Epsilon have been quiet for weeks. We've been on the back foot in Charlie and Delta fighting for every scrap of ground. Moving our forces like that cost us territory we've already paid a high price for. Sir, permission to speak freely. Might want to consider a review of the intelligence. Seems like we haven't clue one what we were going after out there. Felt like a show of force we didn't have to make. Don't appreciate being sent on wild goose chases and nearly getting me and mine killed. Sir, hope it was worth it, Sir."

Spectre: "Convincing my contacts at WA SenCom that my client was an HVT was easy. They agreed that a direct assault on targets in sectors Gamma and Epsilon would draw him out at an acceptable level of loss. Of course, they were unaware that I had arranged for their D.E.A.D. systems to malfunction. I suspected that a sudden appearance of a hole in the WA air defense grid would tip the statistical odds of a deployment of my client to the AO. Everything was proceeding on plan, until callsigns "Ruin" and "Battery" led half a CDP battle group to the location that I was monitoring my targets from. Despite that minor inconvenience, I was able to proceed, engaging my client as he disembarked his transport, and liquidated as specified. That momentary look of stupid surprise on his face as he realized he was already dead... was... priceless."

Ruin: "That whole setup was to smoke out one CDP a-hole?! And you couldn’t come up with something better than use those guys as bait? Here, I got a better plan for you. Take out their D.E.A.D. and flatten the whole base with standoff. One of these days, you’re gonna get what’s coming to you, buddy. Just hope I’m there to see it."

Spectre: "Was that a threat? Stupid. And naïve. This isn’t a brawl. This... this is chess. You’re pawns, nothing more. You set up the play, and leave your betters – knights, bishops, queens, and rooks – to strike tactically, surgically. You set the stage doing whatever it takes to make the story convincing, getting hundreds of lies if must be. Then, at the right time, with a single flick of my wrist, thousands can be saved."

Spectre also appears in Call of Duty: Mobile, as part of the Dream Crystal Draw during Season 2 in 2019.

Spectre makes his official Comics debut during Season 4: Wild Dogs in 2022. He is shown to be attacking Price’s UAC convoy after they are forced to a halt by falling rocks, swiftly killing an agent with his Shadow Blade. 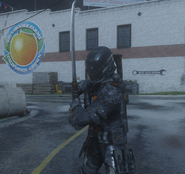 Spectre wielding the Path of Sorrows in Black Ops 3.

Close up on Spectre's "Spectral" outfit.