The Spetsnaz appear in the several missions throughout the game featured as the main antagonistic force. They first appear in "Executive Order", when fighting Alex Mason, Frank Woods, Joseph Bowman, Terrance Brooks, and Grigori Weaver off in a Soviet cosmodrome as the Americans try to abort a space launch. Next they appear in "Numbers" when attempting to capture Dr. Clarke to prevent him from revealing information on Nova-6 to the CIA. In Crash Site the Spetsnaz appear as enemies towards the end of the mission, working directly with the Viet Cong. WMD sees the Spetsnaz guarding the whole facility. And the Spetsnaz Operative appears alongside Viet Cong forces in Payback . The Spetsnaz are harder to kill than normal opponents in Call of Duty: Black Ops, due to increased health and more accurate aiming than other enemies in the campaign. They also utilize combat techniques such as rolling out from harm's way.

The Spetsnaz are a playable multiplayer faction always opposite to the Black Ops. They wear similar garb to their opposite faction, but use slightly different camouflage and they don't use balaclavas or olive-drab colored helmets as seen in "Executive Order", "Numbers" or "WMD".

Lev Kravchenko, a Spetsnaz operative, appears in Old Wounds. Some Russian Soldiers also bear gear and clothing identified with the Spetsnaz. Otherwise, they make no further appearance in the game.

The Spetsnaz appear throughout the campaign as well as being a faction in multiplayer.

Two Spetsnaz operatives team up with J-SOC in the Arctic levels of Call of Duty: Strike Team.

The Spetsnaz first appeared in the third mission Fracture Jaw wearing their camouflage KLMK or KZS uniforms, though only appearing in small numbers. They appeared in the Brick in the Wall level in an abandoned warehouse in East Berlin after having captured Bell and the other spy operative in their meeting with Anton Volkov. They reappeared in the mission Redlight, Greenlight alongside Soviet Armed Forces guarding the military base while doing their special forces training drills for practice in urban warfare in a hypothetical Invasion of United States of America scenario for the knowledge of the layout of almost every American city and town in the event of a nuclear war and they appear once more the in mission Echoes of a Cold War searching for information at Mount Yamantau nuclear bunker. They reappear again in the mission with their uniforms in the level Break on Through and make there last appearance in the final mission The Final Countdown and Ashes to Ashes. While other missions featured the Soviet Armed Forces, it is unknown if they been wearing their uniforms all black when not wearing their military uniform, but would be identified it's the Spetsnaz instead because like back at 1968, there could be to note that they could be rogue units like Dragovich's men are and where. Would explain that Spetsnaz forces within different countries that are part of the KGB or the GRU units, like in the USA. It's hard to identified them in black uniforms but it is the special unit that they are rogue units instead. The rogue ones with black uniform are Perseus' men who agreed with him to oppose against the US and the West.

The Spetsnaz are a playable multiplayer faction always opposite to the CIA or MI6.

A white-dressed Soviet with an AK-47.

A Spetsnaz meleeing with a KS-23.

The Spetsnaz Operative in "Payback".

Another Spetsnaz soldier guarding with a AK-47.

Urban Spetsnaz equipped with Hardline and a PM63 w/ Grip. 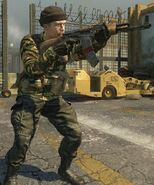 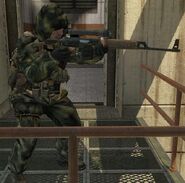 Urban Spetsnaz equipped with Ghost and a Dragunov.

A Spetsnaz soldier with his AK-47. 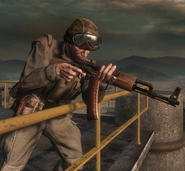 A Spetsnaz soldier in Hazmat gear as seen during "Rebirth". 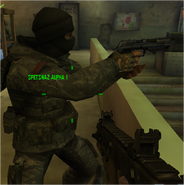 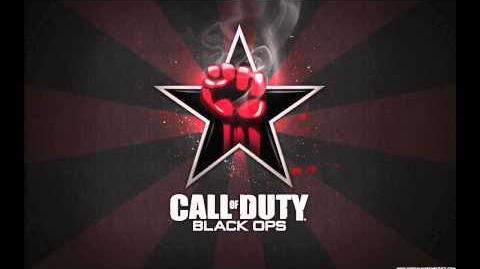