Alex Mason or Frank Woods (depending on who shoots first)

The Spetsnaz Operative, or Roulette Interrogator, is a Russian soldier who tortures Mason, Bowman, and Woods with a game of Russian roulette in the mission "Payback" in Call of Duty: Black Ops.

Prior to the game of Russian roulette, the Spetsnaz Operative is taunted by Bowman until he becomes furious and kills him with several blows to the head from a lead pipe. After throwing Bowman's corpse to the ground, he calls for Woods to take Bowman's place. The Operative watches as the VC Bookie places a Python revolver at the table, forcing Woods and Mason to begin the game. When Mason's turn comes, he turns the gun on the VC Bookie, shoots him, and takes his CZ75, killing most of the soldiers in the room. The Spetsnaz Operative escapes narrowly, and flees through the cave so he may alert Kravchenko. After a brief chase, he is cornered and killed by either Mason or Woods as he tries to pry an exit open. 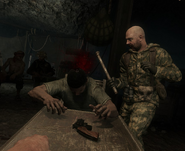 The interrogator running from Mason.