Call of Duty Wiki
Register
Don't have an account?
Sign In
Advertisement
in: Call of Duty: Black Ops Lethal Equipment

The Spikemore is a special variant of the Claymore exclusive to the Zombies map "Shangri-La". The Spikemore is visually a normal Claymore with the addition of Punji Stakes crudely attached to the front with what is presumably a kind of adhesive tape. It functions the same way as the Claymore, costing 1000 points to purchase, containing Punji Stakes attached with fireworks that activate when tripped. The foot stakes seem to ricochet off walls once or twice after being fired. The Spikemores are less useful than their counterpart, the Claymore, since Spikemores lose their one-hit kill ability at Round 25 and the normal variant at Round 27, although Spikemores have a wider spread, thus killing more zombies. Spikemores refill every round after it is purchased like Claymores do in other Zombies maps. 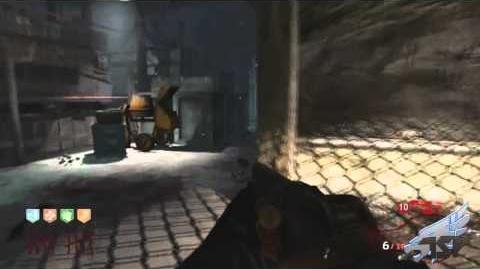 Where to find the Spikemores