Splash is set in a vibrant and colorful abandoned waterpark in the U.S. The over the top and varied map design makes it a frantic and fast paced map. The multiple waterslides encircling the map all converge on one spot, forming "choke-point" in the middle of the map. Although it is set in an abandoned waterpark, there are still a few, small underwater areas available for the player to swim through. Medium to Long range weaponry is well suited for this map.

The Black Ops spawn is located at the entrance of the the waterpark. There are a few open buildings near this section that don't see much combat, and thus these structures can be utilized for calling in Scorestreaks or regenerate health.

The CDP spawn is located near the gate area. There is a restaurant/gift shop near the spawn that functions similarly to the buildings near the Black Ops spawn.

The Skull Bay section of the waterpark makes up the upper right lane of the map. Inside of this section is a pretzel kiosk and surfboard locker that can be used as cover and obscuring the line of sight across the area. There is a building, marked by a giant rock skull, called "Loot" tends to see the fiercest combat in this section of the park. The large body of water along the side of this section can only briefly be used for swimming, as players will be given a warning signal when they enter it.

Kraken's Revenge makes up the middle lane of the map. As with most other three lane maps, heavy fighting between numerous players.

The center portion is what makes this lane hazardous. This is also where the two way underwater area is seen where players can dive in and swim from this lane back to the upper right lane.

On the CDP spawn, similar to the upper right lane, there are two ways when venturing unto the center. Either through the building or on foot through an outdoor structure.

The River Slide is the lower left lane of the map. Not the most populated lane but still expect some activity. Just like the other lanes, there are two routes to enter when spawning on the CDP spawn. A two story building and the river slide itself. It has also has an unnoticeable wall running spot. It is advised that the large fracture of the ship will be secured by enemies. It is also possible to underneath the ship leading to the River Ride entrance.

There aren't a lot of areas used for wall running. Some of the buildings can be used for some opportunities. The rock formations, however, can't be used. There is one uncommon wall run area on the lower left lane. A long sign in front of the ship is situated outside of the map but is actually a wall running spot. Not a lot of player notice it due to how well hidden the sign is.

Players are very vulnerable when securing these position because there isn't any coverage within these locations. 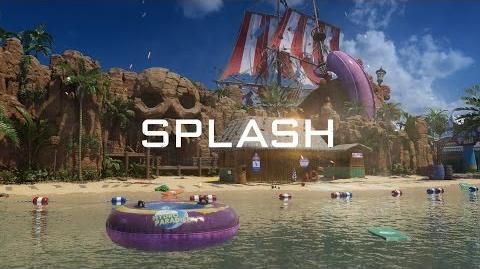 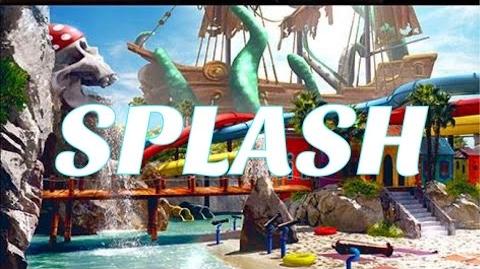