Call of Duty Wiki
Register
Don't have an account?
Sign In
Advertisement
in: Call of Duty: WWII Nazi Zombies Enemies

The Shadowed Throne
The Tortured Path

The Stadtjäger (English: City Hunter) is the final boss Zombie featured in the main quest of the Nazi Zombies map The Shadowed Throne in Call of Duty: WWII. It also appears as the boss within "Across the Depths", the second chapter of The Tortured Path

The Stadtjäger has multiple heads, a motor on its chest, a saw blade attached to his left arm and a Geistkraft cannon attached to its right arm. During the battle on Peter Straub's Zeppelin, the Stadtjäger can perform electric wave attacks and charge to a player similar to a Wüstling.

In the boss fight in "Across the Depths", the Stadtjäger still has a large amount of health, but can be taken down easily with high damage and high fire rate weapons. Players should be wary of standing on the spot where the Stadtjäger spawns; should the player be standing there, they will instantly be downed, losing all 3 of their Geischild points and being teleported to the room below where it spawns. 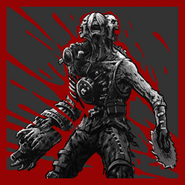