"There is no escape from the inferno!"
— Nikolai while killing zombies with the upgraded fire staff.

The Staff of Fire is one of four buildable Elemental Staffs in the map Origins.

The Staff of Fire shoots three balls of molten rock, horizontally, when fired, which will cause zombies near the impact zone to burn, stunning them in pain before either burning up or recovering depending on if shot again.

Once upgraded to the Kagutsuchi's Blood, it functions the same as its previous version, except with a bigger blast radius and any zombies hit point blank range will be vaporized. The player can also hold down the firing button in order to charge it up, at the cost of more ammo per charged shot. When charged and released, it fires three fireballs, horizontally like the previous version. However, any zombie nearby will be incinerated and it will last on the floor/wall for a few seconds, before it explodes in a bigger fireball.

Furthermore, the Kagutsuchi's Blood has a melee attack that involves swiping with the spikes on the head of the staff. This attack is a one hit kill until round 16. If the One Inch Punch is equipped, its melee attack overrides the staff melee attack. If a player has PhD Flopper and dives to prone with the fire staff equipped, the zombies will die by the explosion, but the flop will also create a fire effect that will do extra damage to zombies and leave them burned as well. The only way the player can acquire PhD Flopper is from Der Wunderfizz.

The crystal of the Staff of Fire makes an appearance in Blood of the Dead, where it is used by Edward Richtofen to defeat the Warden and free the souls trapped within the Alcatraz Pocket Dimension.

To obtain the Staff of Fire, the player must gather three parts of the staff and the elemental crystal, as well as the gramophone and the correct records to access the Crazy Place and the lower levels of the Excavation Site.

The staff parts can be obtained in the following locations:

The red record can be found near the church. It can spawn on some boxes between the tank and the staircase up (may be hard to spot if the tank is in place), on the benches of the church opposite of the basin, or on some boxes next to Generator 6. The gramophone always spawns on the floor inside the Excavation Site, and the record to access the lower levels can be found outside around the Excavation Site.

Once all parts have been collected, the staff may be built in the lowest level of the Excavation Site, in the red pedestal. After it is built, it can be picked up by any player, and if the staff is switched to another weapon later on or the player holding it bleeds out (or disconnects), the staff will return to its pedestal.

The Staff of Fire in Origins

The staff part from the Ritual of the Ancients box

The plane holding one of the staff pieces

The Staff of Fire in Black Ops III.

How to upgrade to Kagutsuchi's Blood

After obtaining the Staff of Fire, it can be upgraded to Kagutsuchi's Blood. First, the player must solve the riddle located in the Crazy Place, located in the Fire part of it. The riddle in itself is fairly easy, as the player must kill approximately 30 zombies with the Fire staff on the metal grates. If done correctly, the zombies will shortly explode into a black smoke cloud after dying, and they will fill up the four cauldrons nearby. Note that this step can be done at the same time as upgrading the rest of the staffs, as the zombies killed will count for their final steps.

Once the riddle in the Crazy Place has been solved, there will be another in the original realm. On the basement of the church, there are seven torches on the walls with a number below them (one of them is a bloodstain that represents the number 4, instead of being written in chalk like the rest). Upstairs on the far wall, there are symbols on the wall, with four of them lit up. Using the ternary numeral system, the player must decipher the symbols into numbers and light the torches with the appropriate numbers using the staff. The images below can also be used as an easy reference sheet. Note that 4 is always one of the numbers. Once all four torches have been lit, an audio cue will play and a beam of light shooting up can be seen coming from the Excavation Site.

Next, the player will have to order the floating rings inside the lower levels of the Excavation Site so that the lights on the four rings are red. The rings can be rotated by pulling the levers located around lower levels, two on the normal walkway and two on the wooden scaffoldings. Once all rings' lights are red, the red orb inside of them must be shot with the staff. It should glow red, and shoot up in the air.

Finally, the player must place the staff inside the red pedestal in the Crazy Place, and kill approximately 20 zombies in the Crazy Place to collect their souls into the staffs. Once it is done, Samantha may talk to the player about the "power of fire being available", and the staff icon on the HUD now has a red outline. The Kagutsuchi's Blood can now be picked up from the pedestal. As with the regular Staff of Fire, if the staff is lost by any means, it will be returned to its pedestal in the Excavation Site, and it does not have to be upgraded again.

The killzone for the Crazy Place riddle

Three of the torches in the basement

What number each symbol represents 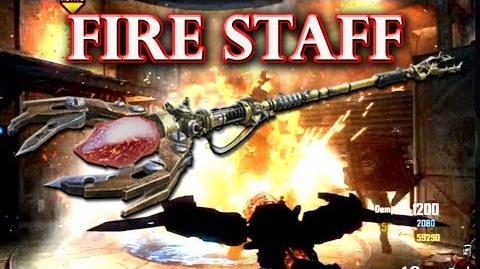 How to build and upgrade the Fire Staff
Video tutorial

The Staff of Fire on its pedestal.