View source
watch 01:09
How to Build the Staff of Lightning
Do you like this video?
Play Sound

"The spirits of the ancients flow through this staff. The energy will destroy you!"
— Takeo while killing zombies with the upgraded lightning staff.

The Staff of Lightning is one of four buildable elemental staffs in the map Origins.

The Staff of Lightning shoots bolts of lightning when fired, and similarly to the Wunderwaffe DG-2, will chain and kill multiple zombies, although it is limited in the fact that the lightning will chain up to two or three zombies per bolt. If shot at the feet of zombies, it is possible to kill more than two-three zombies.

Once upgraded to the Kimat's Bite, it will chain more zombies than its previous version.The effectiveness for this weapon runs out at about round 25 as normal attacks will only make crawlers (unless the player gets a headshot, upgraded or not), however the charged attack can effectively kill until round 30-40. The player can also hold down the firing button in order to charge it up, at the cost six ammo per charged shot, giving the player three before they have to reload. When charged and released, it fires a slow moving ball of electricity, which will travel in a straight line until it reaches a wall or floor. While passing by zombies or on the wall or floor, it will release bolts of lightning, stunning and killing nearby zombies. However this will not kill a large amount of zombies, so it is recommended to keep moving as zombies can still hit the player.

Furthermore, the Kimat's Bite has a melee attack that involves swiping with the spikes on the head of the staff. This attack is a one hit kill until round 16. If the One Inch Punch is equipped, its melee attack overrides the staff melee attack.

After upgrading, it gains a secondary "attachment" called Sekhmet's Vigor which when activated by pressing the "use attachment" button, which will cause the player to flip the staff and use the bottom end. This can be used to revive a downed player by "shooting" them directly. The "vigor" is a fast-moving ball, which will travel in a straight line. It is recommended to make shots count, because it is very easy to miss with this weapon.

To obtain the Staff of Lightning, the player must gather three parts of the staff and the elemental crystal, as well as the gramophone and the correct records to access the Crazy Place and the lower levels of the Excavation Site.

The staff parts can be found in areas only accessible by jumping off the tank at certain locations. These locations are:

Unless there are two or more players to use the tank, it is very difficult though barely possible to obtain both of the parts on one run on the way back to church.

The purple record can be found near Generator 4. It can spawn inside the tunnel near the gateway to the Crazy Place, on the bandwagon to the left when entering the tunnel, or on the table next to the Der Wunderfizz machine. The gramophone always spawns on the floor inside the Excavation Site, and the record to access the lower levels can be found outside around the Excavation Site.

Once all parts have been collected, the staff may be built in the lowest level of the Excavation Site, in the purple pedestal. After it is built, it can be picked up by any player, and if the staff is switched to another weapon later on or the player holding it bleeds out (or disconnects), the staff will return to its pedestal.

The Staff of Lightning in Origins

The Staff of Lightning in Black Ops III.

How to upgrade to Kimat's Bite

After obtaining the Staff of Lightning, it can be upgraded to Kimat's Bite. First, the player must solve the riddle located in the Crazy Place, located in the Lightning part of it. Near the portal on the wall, there are purple triangular shapes on the wall, representing a keyboard. On the opposite walls are notes of chords that must be played on the keyboards using the staff. There are three chords, and each chord has three notes to play.

As the chords are never randomized, it is possible to simply memorize the notes to play each time. Only the bottom row is needed, the top row can be ignored completely. When numbering the seven keys on the bottom row from left to right (as in the image below), playing the following combinations will solve the puzzle: 136, 357, 246.

The keyboard and notes needed for the puzzle

Once the riddle in the Crazy Place has been solved, there will be another in the original realm. There are eight panels that the player can interact with around the map (one of which is automatically completed, leaving seven in total), and the player must turn the knobs on the panels in the correct position. Note that this can be done at any point in the game as the player passes by the panels, as long as they remember how much each knob is turned, which can save a fair amount of time and unnecessary running. The panels are located in the following locations:

When doing this step after completing the riddle in the Crazy Place, the panels will spark with electricity until they are turned in the correct position. Only one panel will spark at one time, thus the next panel will not spark until the previous is completed. They go in the order listed above. Once all knobs are turned in the correct position, an audio cue will play and a beam of light shooting up can be seen coming from the Excavation Site.

Next, the player will have to order the floating rings inside the lower levels of the Excavation Site so that the lights on the four rings are purple. The rings can be rotated by pulling the levers located around lower levels, two on the normal walkway and two on the wooden scaffoldings. Once all rings' lights are purple, the purple orb inside of them must be shot with the staff. It should glow purple, and shoot up in the air.

Finally, the player must place the staff inside the purple pedestal in the Crazy Place, and kill 25 zombies in the Crazy Place to collect their souls into the staffs. Once it is done, Samantha may talk to the player about the "power of lightning being available", and the staff icon on the HUD now has a red outline. The Kimat's Bite can now be picked up from the pedestal. As with the regular Staff of Lightning, if the staff is lost by any means, it will be returned to its pedestal in the Excavation Site, and it does not have to be upgraded again.

One of the electric panels, this being next to Generator 5 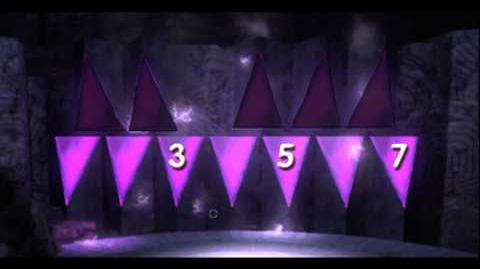 How to build and upgrade the Lightning Staff
Video tutorial