1000/15 (a close range direct hit will always be a kill until round 23, from mid-long range zombies will only be stunned momentarily with 15 damage)

"Do not fight the inevitable, the storm will take you!"
— Richtofen while killing zombies with the upgraded wind staff.

The Staff of Wind is one of four buildable elemental staffs in the map Origins.

The Staff of Wind shoots blasts of wind when fired, (similar to the Thundergun), and will instantly kill zombies at point blank range until round 23 and knock back any zombies further away. However, the range is not as far as the Thundergun, so you will have to be a bit closer to kill zombies with it.

Once upgraded to the Boreas' Fury, it functions the same as its previous version, however its blast of wind has more range and a wider area of effect. The player can also hold down the firing button in order to charge it up, at the cost of more ammo per charged shot. When charged and released, it fires an initial blast of wind, then expands rapidly to form a tornado, attracting any zombies fairly close to it and dragging them to the center, instantly killing them.

Furthermore, the Boreas' Fury has a melee attack that involves swiping with the spikes on the head of the staff. This attack is a one hit kill until round 16. If the One Inch Punch is equipped, its melee attack overrides the staff melee attack.

To obtain the Staff of Wind, the player must gather three parts of the staff and the elemental crystal, as well as the gramophone and the correct records to access the Crazy Place and the lower levels of the Excavation Site.

The staff parts can be found in the Giant Robots' heads, each of the three robots holding one. To access the interior, the player must shoot the foot with glowing lights under it and get stepped on by it, to be sent to the robot's head. Note that only one of the feet is lit up each time a robot makes a pass, and it is randomized every time.

The yellow record can be found near Generator 5. It can spawn on the partially broken wall to the right of Stamin-Up, on the boxes near the entrance to Lightning tunnel or in the Lightning tunnel on the table at the entrance. The gramophone always spawns on the floor inside the Excavation Site, and the record to access the lower levels can be found outside around the Excavation Site.

Once all parts have been collected, the staff may be built in the lowest level of the Excavation Site, in the yellow pedestal. After it is built, it can be picked up by any player, and if the staff is switched to another weapon later on or the player holding it bleeds out (or disconnects), the staff will return to its pedestal.

The Staff of Wind in Origins

One of the wind staff parts, inside a robot's head

The portal for the Staff of Wind

The pedestal holding the gem

How to upgrade to Boreas' Fury

As the correct order never changes (though the rings are initially randomized), it is possible to use the image below as reference. An easy way is to go between the rocks to the right of the portal gateway, and match the symbols as provided. Once the rings are correctly placed, the inner rings will rotate up, and an audio cue will play.

The "key" to this riddle

Once the riddle in the Crazy Place has been solved, there will be another in the original realm. There are three smoking stone balls around the digsite, located at Generator 4, next to the tank's returning pathway as well as near Generator 5. The player must shoot these balls with the Staff of Wind to direct the smoke towards the Excavation Site. The ball on the tank's path has be accessed from the church by backtracking the path (or by jumping off the tank if it is returning from the tank station) so that the smoke can be directed the right way. Once all balls have been shot and the smokes are going towards the digsite, an audio cue will play and a beam of light shooting up can be seen coming from the Excavation Site.

Next, the player will have to order the floating rings inside the lower levels of the Excavation Site so that the lights on the four rings are yellow. The rings can be rotated by pulling the levers located around lower levels, two on the normal walkway and two on the wooden scaffoldings. Once all rings' lights are yellow, the yellow orb inside of them must be shot with the staff. It should glow yellow, and shoot up in the air.

Finally, the player must place the staff inside the yellow pedestal in the Crazy Place, and kill approximately 20 zombies in the Crazy Place to collect their souls into the staffs. Once it is done, Samantha may talk to the player about the "power of wind being available", and the staff icon on the HUD now has a red outline. The Boreas' Fury can now be picked up from the pedestal. As with the regular Staff of Wind, if the staff is lost by any means, it will be returned to its pedestal in the Excavation Site, and it does not have to be upgraded again. 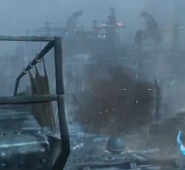 The stone ball behind the Stamin-Up machine

The ball on the outside section of No Man's Land 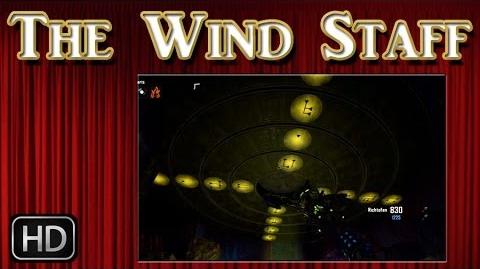 How to build and upgrade the Wind Staff tutorial
Video tutorial