For the city, see Stalingrad.

Get onto the Shore
Get a Weapon
Find Borodin
Survive the Gunners
Get into Red Square.

"Stalingrad" is the fifteenth campaign mission in Call of Duty. Stay safe until the allies can push deeper into Stalingrad.

The player will spawn in a boat. While a Red Army commissar addresses the men on the boat, German artillery and bombers will destroy a number of accompanying boats. Crouch as soon as someone says "Look out!" because a Ju-87 Stuka plane will make a flyby over the boat soon after. Stay crouched because it'll make another flyby soon after with little warning. Several men will jump into the river, where they will be shot by several commissars. If the player chooses to follow, he/she will be shot as well.

After a while, the player will be forced off the boat and onto a dock. Go into the line that's in front. The player won't receive a rifle, but will get ammo. Strangely, when the player actually gets a rifle in the next map, the ammo here will disappear.

If the player tries to run back towards the boats, a commissar will attack normally with a Mosin-Nagant.

The armory position where the player will receive the ammunition

Getting the Mosin Nagant ammo

A commissar attacking.
Add a photo to this gallery

An explosion will send the player into shell-shock mode. Get up and get onto the field, and take a slight left. Being shell-shocked won't cause harm, as the gunners will ignore the player while one is in it. The player will know he/she is on the right path when there's a car on the left side. If not, try to make sure there's a car nearby, and that the player went left from when entering the field.

The objective is a man with a large medikit next to him. This is Borodin, the player's objective. He'll tell the player to run across the field to the ruined truck when he says so. When he does, get over there as fast as possible. He'll snipe one of the gunners, allowing him to get past.

Once he gets past, he'll order the player to do the same thing. When he says go, run to the next car.

When he gets past, he'll make the order to run to the building down the hill. It has a commissar, but he'll take care of him. When he says go, run towards the building and he'll kill the commissar with a headshot.

When the player gets into the partially destroyed building there will be a soldier communicating to the Russian artillery, he'll call in a strike. After about a minute and a half the strike will end and then move out onto Red Square.

Going left. Notice the car nearby.

The player must watch out for the machine gun nests as they're going up.

Run to the truck when he says go.

Run to the car when he says go.

Run to the building when he says go

Artillery destroying the gunners on the beach.

The left of the building the player was in leads to the exit.

The exit.
Add a photo to this gallery 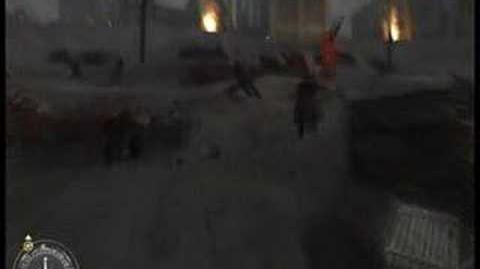 Retrieved from "https://callofduty.fandom.com/wiki/Stalingrad_(level)?oldid=2487127"
Community content is available under CC-BY-SA unless otherwise noted.