Standoff is also available in Call of Duty: Black Ops Cold War, where it was added on May 20, 2021 as part of Season Three Reloaded content for the game. It can also be played in Zombies in Zombies Onslaught.

The map is based on a small border town between China and Kyrgyzstan. It contains multiple spots for long-range combat and sniping, such as the second-story levels of the buildings near Domination objectives A and C, which directly face each other and overlook objective B. Standoff also offers alcoves and paths that can offer cover and escape during gameplay. This map has a lot of buildings, making it a preferred sniping map.

Multiple SDC tanks can be seen throughout the town due to Kyrgyzstan being a member of the Strategic Defense Coalition, indicating a battle had just taken place there. Many of the shops and buildings have signs that are all written in Russian.

The near center of the town has a monument next to an SDC tank, this monument represents a historical figure of Kyrgyz background. The monument also has a Hammer and Sickle, which gives more history as to when the monument was constructed. Sometime during Kyrgyzstan's history of being a republic of the former Soviet Union, this monument was created.

An aerial view of Standoff. 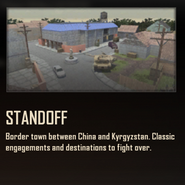 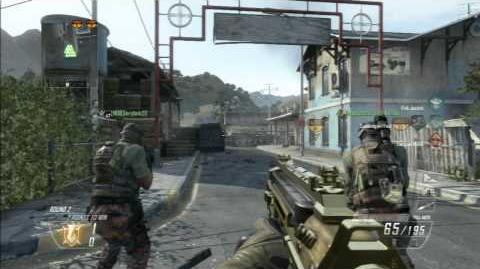