"The roads of Ste. Mere-Eglise connect to Utah Beach to the main peninsula, which should put us in the path of the most likely German counterattack."
— Pvt. Martin on the importance of Ste. Mere Eglise

Going Past the Field Edit

Martin will spawn in the small trench that he entered at the end of the Pathfinder mission. At its end are three large medical kits. Get out of the trench and the player will be at the end of a large field. Foley will instruct Martin and the others to run past the field, but mortars will start to shell it. Don't worry about getting hit; unless it's a direct impact, the player will only lose a chunk of health and movement will become very slow. Even if Martin's been hit, continue to run through the field. At the end, the player will find two houses. the player will want to go through the right house, but it has two MG42s manned by German Fallschirmjäger (paratroopers) and there will not be an explosion to stop it. Martin will have to take out his rifle and shoot the gunners. When they are down, run over to the house and go inside. Take out the Thompson, and kill the two Germans upstairs.

At the start of the field.
Add a photo to this gallery

When that's done, go out the back door and Martin will be in some ruins with enemies standing around. Martin quickly takes out the enemies. If they try to hide, either approach them or throw a grenade at their direction. When they are gone, head forward into what appears to be a train station. Then take out the three or four enemies that Martin encounters there (keep an eye out on the exit to the left of the entrance, as enemies might sneak up on Martin from there). Once the player's done with them, they will find a German soldier manning an MG42 at them from a Sdkfz-251\1 halftrack. This guy can be pretty tricky to take out because of the small area that Martin has to hit him and the MG42 he's firing, so the player should go near a window, lean, aim down the sights, and shoot him. If the player cannot see him or is too exposed while leaning, move until the player's at a safe spot. When he's down, Foley will open the door to the next area.

(When the player gets into the train station, go to the last door on the left and toss a grenade out next to the halftrack. Martin can do this without exposing himself to the MG fire. This is an alternate method.)

(Another alternate method is to stand several feet back from the windows and aim down the sights and take out the machine gunner. At that range, Martin can kill the machine gunner without losing significant health).

Second floor of House 1. Clear it of all resistance. Notice the grenades near the MG42. Make sure to get them if you are low on grenades.

The Ruins of Ste. Mere Eglise.
Add a photo to this gallery

Now the player will be near another house. The garage on its right has an Luftwaffe Fallschirmjager MG42 gunner, so try to take him out before the player goes to the house. When he's down, run to the left side of the house and throw grenades into the windows. This will either flush out or kill the four enemies inside, making it easy for the player to get inside.

When Martin's inside, turn right and toss another grenade. Again, this will take care of any problems in that room (four enemies), so go in and finish off the survivors. When the player's done, go straight, and they will end up in the garage. If another gunner has appeared, take him out. Otherwise, go to its exit and take a right, then go forward until a staircase is seen. There should be a troop there, so take him out. If not, take the large Medical Kit and go downstairs, take a right then go back to the main room. When Martin is there, he will follow his allies to the chicken coop and graveyard.

The second house. It is being held by German Fallschirmjager's (Paratroopers). The player must kill them all then prepare to attack the other Germans in the Chicken coop area.

MG-42 Gunner getting shot at in a garage.

Exit to the chicken coop.
Add a photo to this gallery

Martin will end up in a chicken coop/graveyard. The entrance has some large medical kits, so do not be afraid to use them if needed. Grab the M1 Garand and aim at the heads of the troops who are hiding behind the fence. When the Martin goes outside, make sure to check the right, since there's usually another troop or two behind the fence there. When the troops in the chicken coop are gone, the player will have to go through the graveyard.

Don't rush toward this area immediately! Pick off a few enemies that are near the route the Martin is going to (maybe five), then run! It will save the player a lot of trouble. If the player gets hit during the trek, the medium-sized building on the left has a large medical kit and a few troops, so make sure to either toss a few grenades or bring out the Thompson before entering. Any allied troops who die here will sometimes be replaced by an ally with a BAR. 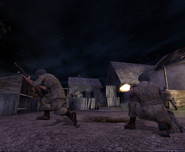 Airborne troopers fighting in the graveyard.
Add a photo to this gallery

When the graveyard is cleared out, Martin can either go left or go forward. If the player goes left, they will find the first objective being guarded by two MG42s. It's possible to stop them from there, but it's more trouble than it's worth. If Martin goes forward he will end up in a church. If he goes the left he will find a crack in the wall where he fire upon the enemies and the Flakpanzer, giving him the upper advantage. When they are down, go to the objective from the left path described earlier. Foley will order Martin to place an explosive on the Flakpanzer. So place the explosive on it, and run!

The ideal point to attack the German FlaK crew

Now that the first Flakpanzer is destroyed, Martin and the team can move up to the second Flakpanzer. Go past the remains of the Flakpanzer, and they will find a large field with the second Flakpanzer firing at the sky, along with some troops using the remains of a building as cover. Martin and his allies take out the six Germans defending the Flakpanzer and destroyed it. The first FG42 will be dropped here, so get it if the player wants it. It does very good damage, has reasonably manageable recoil as long as the player burst fires and a scope. Remember to set it to full-auto once the player gets it, since dropped ones are semi-automatic.

(Alternatively, run through the ground porch on the right to the right side of the panzer. Shoot the enemy who sees Martin, slap a charge on the Panzer and run—the explosion will take everyone else out.)

When the second Flakpanzer is down, go forward from the front of its remains, take a right, then look forward. The player will see a small opening with allies crowded around it. Go through it and follow it until the player gets to the end of a house. Look to the right of the ending, and they will find a mini-trench filled with six Germans. Grenades work best here. When they are down, take a left and go forward until Martin sees another Flakpanzer. When Martin gets to it, look right and scan the area for a house that has about three or four enemies inside. Take them out and use the house as a vantage to point to take out the six or so enemies near the Flakpanzer. Tossing a grenade or two will help. When most of them are down, go to the objective and set a bomb on it. When it's destroyed and all of the enemies are dead, Foley will rally the men for a debriefing.

The entrance to the third Flak's area.

The trench that's next to the house.

Retrieved from "https://callofduty.fandom.com/wiki/Ste._Mere-Eglise?oldid=2504283"
Community content is available under CC-BY-SA unless otherwise noted.