The Model 24 Stielhandgranate or the Stick hand grenade was a WWII grenade. Since before the First World War, German grenades were based around damage from the physical explosion, as opposed to the more common (e.g. US) approach to grenades, which were based around fragments being launched through the air to maim enemies (hence the name fragmentation grenades). As such, the German Stielhandgranate did, in real life, have a slightly larger blast range than the Mills 36 grenade used by British infantry during World War Two. It appears in all WWII Call of Duty games, and in the Call of Duty: Black Ops campaign level "Project Nova." The Stielhandgranate can also be found on the first four Nazi Zombies maps.

Call of Duty 1 and UO

In Call of Duty (and its expansion pack Call of Duty: United Offensive) all grenades are statistically similar. They have a damage range of 250-10 in single-player, and 120-5 in multiplayer, with a fuse of five seconds. They also have a melee attack dealing 50 damage with an animation similar to a pistol whip.

This grenade is the German grenade of choice. It is exactly the same as the Allied grenades, but much more common, as it is normally dropped by dead German soldiers. It has a different animation when thrown; the pin is pulled from the base and the grenade tumbles through the air when thrown.

The maximum number of grenades one can hold is 10, although in practice this only occurs in single-player.

The stielhandgranate is issued to the German team. In multiplayer, grenade distribution is determined by the weapon one spawns with. Those equipped with a Scoped Kar98k receive one grenade; those with the MP40 or MP44 receive two; and those with the Kar98k receive three. Importantly, in Call of Duty players cannot be stunned by grenades.

In Call of Duty: United Offensive, the damage and max number of grenades stays constant, but a few changes are enacted. Players can be shell shocked by grenades. Grenades also have the ability to be cooked, where the grenade is armed but kept in the player's hand so that the fuse is shortened when thrown. Grenade distribution is totally changed as well; instead of being determined by the weapon equipped, it is determined by rank. Privates spawn with one grenade, Riflemen with two, and Platoon Sergeants with three.

In Call of Duty: Finest Hour, the Stielhandgranate is still the primary Axis grenade. It is commonly seen during all campaigns, dropped by fallen foes as well as being found in in pre-set stashes. It is more abundant than the Allied grenades, and therefore may quickly replace the player's starting grenade supply.

In Call of Duty 2 this weapon is the standard Axis grenade. The grenade is frequently found among dead enemies. It functions in the exact the same way as the others. It is much more common than the Allies ' grenades, therefore, will normally be used in almost every mission. 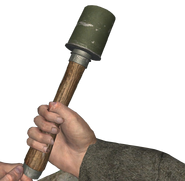 In Call of Duty 3, the M24 is frequently dropped from dead enemies. It is very common throughout the campaign. The effectiveness of grenades depends on difficulty and skill of the thrower. On Easy and Regular, the grenades are quite effective, but in Veteran the enemies usually evade the blast in time, unless they are holed up in a building or small room with no exit other than the one that the player is throwing the grenade through.

In Call of Duty: World at War the Stielhandgranate is found fairly commonly during the Russian campaign in singleplayer, but is absent from multiplayer, aside from the co-op campaign, and Nazi Zombies. The grenades are used if the player runs out of grenades from the start of the mission. The grenades are automatically picked up and will replace the RGD-33 if the player needs more grenades.

The Stielhandgranate is available in all maps for 250 points. The player starts off with two at the beginning of the game and receives two additional grenades per round. The Stielhandgranate is very effective for making crawlers, as explosives cause minor damage and usually gib their extremities. If thrown too close, the grenade can stun, hurt or even down the player.

They are able to be purchased from the walls on every Nazi Zombies map, for 250 points. Purchasing them fills the player's stock up to its maximum of four.

The Stielhandgranate can be obtained from the Mystery Box as well. This happens when the player has 0 to 2 grenades and goes to the box when the round number is changing, although this rarely happens.

The Stielhandgranate functions as the main German grenade in game and are used when the player runs out of their starting supply of grenades. They can be collected whenever the player has a free grenade slot and walks over a German's dead body.

In Call of Duty: World at War (DS) this grenade is featured in the game, and as usual, is the main grenade of the Wehrmacht. It can be picked up and used like a normal one. Statistic wise, it is about the same as the Mk. 2, but flies through the air a little slower.

In multiplayer, if the German faction is chosen the player will have 5 Stielhandgranaten instead of 5 Mk.2 grenades like all the other factions.

One should also note that, unlike in World at War, the Stielhandgranate will roll around once thrown like the other grenades in Black Ops.

Retrieved from "https://callofduty.fandom.com/wiki/Stielhandgranate?oldid=1083063"
Community content is available under CC-BY-SA unless otherwise noted.