"Fight over the tight interiors and long roads of a rural Soviet town."
— Stockpile's map description

Stockpile is a multiplayer map released as a part of the Escalation DLC for Call of Duty: Black Ops. The map takes place in a suburban village in Russia that includes a stockpile of arms inside one of the buildings.

The map also features a building in the center of the map with two large steel doors that can be opened and closed with switches located next to them on both the inside and outside of the building. When using the switch, a siren sounds and alerts the building's occupants. This building is usually where most of the fighting occurs, and it contains the "B" flag in Domination as well as a bomb site in Demolition and Search and Destroy. Even with both doors closed there are still multiple entrances which a player can enter the building to flank the opposing team at the doors getting them by surprise.

Gameplay inside the Stockpile building.

Other buildings around the map.

Another view of the main building. 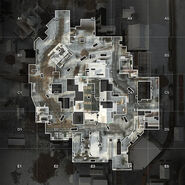 Stockpile overview.
Add a photo to this gallery

Retrieved from "https://callofduty.fandom.com/wiki/Stockpile?oldid=2340878"
Community content is available under CC-BY-SA unless otherwise noted.