"Standing your ground creates a defensive circle which boosts damage and armor over time while inside."
— Description

Stone Cold Stronghold is a Perk featured in Call of Duty: Black Ops 4 Zombies. It can be unlocked for use at Level 2, or alternatively can be obtained through Secret Sauce.

Stone Cold Stronghold, when purchased, will allow the player to create a blue circle on the ground by standing in place for a few moments. While the player is within the circle, they will receive a damage boost against enemies and slowly gain armor over time.

When Stone Cold Stronghold is selected as the "Modifier" perk and the player has all of their other perks, it will grant the player increased damage boosts and armor whenever enemies are killed within the circle. 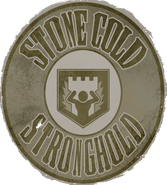 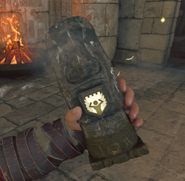 The Perk statue for Stone Cold Stronghold as seen in the Chaos story maps for Call of Duty: Black Ops 4.
Community content is available under CC-BY-SA unless otherwise noted.
Advertisement