Stormfront is a multiplayer map in Call of Duty: Ghosts.

Stormfront is set on the futuristic abandoned urban streets of San Diego during a storm.

Stormfront, being one of the largest maps in the game, is primarily long-range oriented. The streets provide lots of long, unobstructed lines of sight without much interference, while the interior sections of the map are more fast-paced, favoring short-range weapons.

There are some weapons that allow a player to dominate both aspects of Stormfront. An LMG such as the Ameli is a good choice, due to its high damage per round. Marksman rifles such as the IA-2 also are highly versatile, adapting to whatever engagement the player chooses. Sometimes, skilled players with sniper rifles, capable of engaging at close range, can excel on this map. However, a player with sufficient skill to do this is very hard to come by.

Beginning of the match

This area consists of

The Shop is the largest building in the map and the most populated one. Sniper platforms can be accessed by climbing up the two ramps at the sides, there is decent cover around the platform to aid in keeping the sniper hidden.

This portion of the building is heavily guarded. Most of the time, the heavy firefights occur in the main entrance point. There is a small computer shop at the back, not a lot of action but still active and can be utilize in a flanking situation and alternative passage. There are few ways in travelling up to the second floor such as the provided escalators and elevator. The quickest way most players use to enter the building is the large sculpture that acts as a bridge/ramp allowing players to get on the second floor.

It has some activity within the area but not the most hazardous. Flanking Positions, Alternative Routes and Hiding Spots are one of the offensive/defensive play styles utilized when navigating throughout the area.

The Streets are mostly on-foot navigation routes that divides the two buildings. Though there are some vehicles that are either coverage, players are defenseless in this route, as they are out in the open.

This Section has more flanking positions in maneuvering from the top floors. A couple of hiding spots are in the area as well as a glitch. Not a lot of fire engagements occurs but still has some firefight motion. There is a small tunnel that players can use to flank the area. A platform linking to the entrance of the bar is often a sniper/scouting position.

Both Domination and Search and Destroy/Search and Rescue will be very dangerous due to the objective placements they are on. 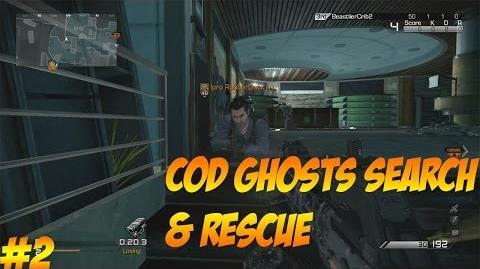