For another Killstreak, see Airstrike.

The Strafe Run is used in the form of a Huey, in the 6th campaign level of Black Ops, "The Defector". It is used to support the SOG in the streets, taking down the opposing NVA. Unlike Modern Warfare 3, it is only used in one mission in the entire game, but it can be used countless times during a certain part of the level.

The Strafe Run is a nine pointstreak in the Assault Strike Chain. Once obtained, this reward allows the player to call in five AH-64 Apaches on a designated area of the map. The helicopters will sweep over that area of the map twice over a period of 60 seconds from opposite sides before exiting.

The Strafe Run can be used to devastate enemy forces during objective games and on maps that lack cover. The combined firepower of five helicopters means that few opponents will withstand such aerial hellfire; and the choppers cover the map two times, from opposite sides, thus enemies lacking Blind Eye will be affected. Players with said perk will get killed as well if they cluster together to teammates without it.

The Strafe Run can be targeted easily by SAM Turrets; they do not possess any flares, and players can destroy each helicopter with a single rocket from a launcher. The Javelin and Stinger can even take multiple helicopters down at once. Each helicopter destroyed adds a point towards a Strike Chain, therefore up to five points can be earned. As a tip, use the Stinger on one of the two helicopters next to the middle one to take out three at once on on side, then use the other missile to finish the last two together.

Furthermore, the Strafe Run will only target enemies in front of it; if line of sight is blocked by an obstacle, they will pass over without firing upon the player.

The best way to take out a Strafe Run is by detonating an EMP.

Another view of the Strafe Run.

A closeup view of the Strafe Run.

A view of the Strafe Run from the ground. 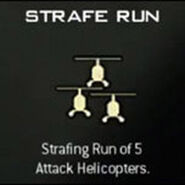 The place holder icon for the Strafe Run.

Out of the multiple Hueys in "The Defector", only one is used in the Strafe Run.

A Strafe Run going down.

The Strafe Run was cut from Call of Duty: Ghosts. Audio files can be found in the game for it and other streaks.[1]

The Strafe Run returns in Call of Duty: Black Ops Cold War as a scorestreak. It was added as part of Season Three content for the game.

Acting in a similar fashion to the Warthog and Thresher from Black Ops II and Black Ops 4 respectively. The Strafe Run first requires players to set a location and trajectory for the planes to attack before TAACOM sends in a flight of two Su-25 that will strafe across the trajectory indicated to them with their automatic cannons while firing air-to-air missiles at any airborne Scorestreaks. The planes then take four seconds to turn before they can preform another strafe. This is repeated until the 4th run, where they fly off after. Players who call the streak should be cautious when venturing outside of buildings when it's active since they can be killed by it.

The aircraft cannot be shot down with launchers, they can be locked on but player-launched missiles are not fast enough to hit them. The Air Patrol can shoot both Frogfoots.

The targeting pad for the Strafe Run.

"Calls in air support to strafe across a marked target area."
— In-game description

Strafe Run returns in Call of Duty: Vanguard as a Killstreak under the name Strafing Run.

It functions similarly to the Precision Airstrike from Call of Duty: Modern Warfare; the player is equipped with a pair of binoculars which are used to mark a target. After a few seconds, an aircraft will quickly strafe that target's location.