For the Call of Duty: Modern Warfare 3 achievement, see Strike!.

Urban desert town with many streets and accessible buildings

Strike is a very urban map with the largest open space being the two roads that run through the map. There are many small buildings that see little combat, although a good sniper can control a large area of the map while being safely planted inside one. Light Machine Guns are favored here.

The two main intersecting streets (in the middle of the map creating a "T" below the marketplace) are where the most choke points for snipers and assault classes are located. The apartment block to the south provides sniper points covering nearly the entire map. Be aware of the towers to the West, they provide a blind corner for rushers. There are long lines of view, and most fighting occurs building-to-building across the streets. People tend to enjoy this map most with Team Deathmatch or Headquarters settings. Desert Camouflage is often preferred.

Strike appears in Old School Mode as a supported map. It features a total of 9 sprites. 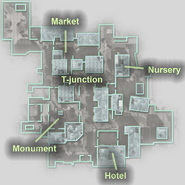 Strike, as it appears in Call of Duty: Modern Warfare 2's Resurgence Pack.

A view of Strike in Call of Duty: Modern Warfare Remastered.