Strike Packages are a crucial component of Extinction, as they are the main secondary offensive tool that players have at their disposal.

The Strike Packages include the I.M.S., the Mortar Strike, the Trinity Rocket, the Sentry Gun, and the Vulture.

The I.M.S. and Sentry Gun are mostly independently controlled, placed by the player in one position, and can be moved around the map by the player as they please. The Sentry Gun can be targeted and destroyed by Scouts and Hunters, so players need to protect the Sentry Gun more actively.

The Mortar Strike and Vulture Drone have completely independent control and require no further user interaction once they're deployed.

The Trinity Rocket is unique in that it is completely user-controlled, although it can be upgraded to fire semi-independent smart missiles, although the player is mostly responsible for how effective those are.

Compared to Equalizers, the Strike Package usually involves far less user intervention, with some not requiring the user to do anything for it to work properly, but this usually comes with a loftier price tag, and Strike Packages usually don't tend to last for as long as Equalizers can. Strike Packages are more of a compliment to a user's playstyle, whereas most Equalizers tend to make the user revolve their playstyle around it. 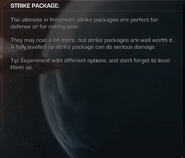