For other uses, see Stronghold.

"Stronghold" is the fifteenth mission of Call of Duty: Modern Warfare 3. This mission marks the beginning of Act 3, the final act in the campaign, and it takes place shortly after "Blood Brothers", at Karlstejn Castle outside of Prague. Following Soap's death, Price and Yuri (the player-character), infiltrate a castle guarded by Russians. The main objective is to learn the location of Vladimir Makarov.

During the loading cutscene, Price contacts MacMillan, informing the latter of Soap's death. Price mentions that Yuri states Makarov uses an old castle to cache weapons, and asks MacMillan if the place sounds familiar, to which MacMillan reveals that they did run UAV surveillance on a suspect castle years ago. With the location now confirmed, Price and Yuri gear up to infiltrate the castle. The mission starts with Yuri and Price parachuting into the castle grounds. As they approach the ground, Price eliminates two guards with his pistol. The pair cross open space and hide behind an old wall as a patrol passes by. The two then drop down into a courtyard with numerous vehicles in it. Crawling under the vehicles, Price plants C4 to cover their escape. Emerging from the last vehicle, Yuri takes out a guard and Price hides the body. A spotlight scans the area, and after it passes, the pair rush across to a platform. Crawling under that, Yuri plants C4 on the underside. Once reaching the edge, a guard drops down and puts out his cigarette. Once he has left, the pair creep to the security center. Price bangs on the door, and when it is opened, proceeds to kill all personnel inside. Studying the cameras, Price decides to go straight to the command center. Using a dead guard's fingerprints, he opens the door. The pair clear out a dark dungeon, using night vision to kill guards. The guards become wise to this and throw flares to help spot the attackers.

Yuri and Price are thrown into fierce combat, and clear out a floor full of enemies. Emerging outside, the two climb up a ladder to reach scaffolding attached to an old bridge, and Yuri places more C4 on it. After crossing the rickety bridge, they breach a wall in a corridor, timing it with the thunder outside so they do not alert anyone inside. The hole in the wall reveals a narrow, vertical passage with rickety wooden beams in it. Yuri and Price climb up until they find a small vent, and overhear a conversation between Alexi and Makarov, which reveals that the Russian President is being interrogated for the nuclear launch codes and that Makarov's men are on their way to Berlin to capture his daughter.

A guard alerts Alexi that the base has been breached, and Price throws a grenade through the vent to buy the pair some time. The two slide down the passage and land in a kitchen where there are more hostiles. Price contacts Nikolai about the location of the daughter and he and Yuri move outside where they face more enemy resistance. Returning inside, the two clear out an office and go through doors to a courtyard where more hostiles are stationed. They quickly dash through and end up on a platform overlooking the bridge. Yuri detonates the C4 that they had placed previously, killing a large force of enemies on the bridge. The pair jump off the platform and charge across the bridge towards another courtyard, where they encounter heavy resistance from infantry and vehicles. A BTR blocks their exit so the pair steal a jeep and drive out of the castle. The jeep comes under more fire from enemy vehicles and the engine is heavily damaged, sending it plunging off a cliff. However the pair both have spare parachutes and safely glide down to the ground as Price signals for Nikolai to pick them up. 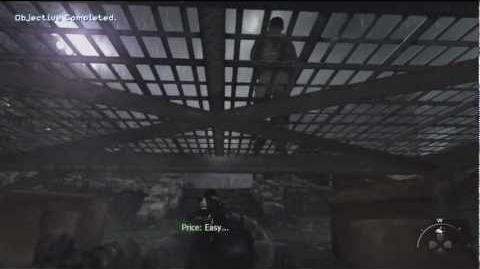 35. After being on the wrong end of a flashbang, there is a control room with lots of TVs. The intel that is in the back left corner of the room on top of a power generator.

36. Leave the command center through the front door, then head right, south, up a flight of stairs and look for a storage area off the catwalk. The intel is atop a small crate. 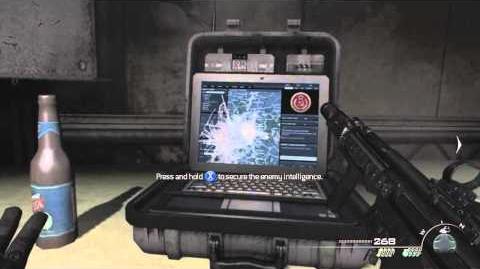 Makarov with President Vorshevsky during a video conference with Alexi.

Parachuting off of a cliff.