Locate Ajax using the remote sniper rifle.
Mark the convoy with explosives.
Rescue Ajax.
Escape from the enemy base.
Protect Merrick and Keegan while they exfil.
Destroy vehicle mounted turrets.

"Struck Down" is the fourth campaign mission of Call of Duty: Ghosts. The mission involves locating and finding Ajax.

The player starts out by assuming control of Logan Walker and has to fight through the enemy line in a San Diego stadium. Logan mounts a .50 cal remote sniper which allows him to see the Greenway Park Stadium. Ajax, who is at the press box, is getting beaten by Federation soldiers.

A convoy of Federation soldiers drives through the park, heading toward the box. The Ghosts go to a parking garage where the player gets in a vehicle and follows behind the Federation convoy. Once the Ghosts get close enough, Logan and Merrick stick the convoy's trucks with their MK32s. The player moves farther up and then he is ordered to detonate the explosives planted on the enemy vehicles. Then chaos erupts. Enemies come in at all directions, and the Ghosts exchange fire with them.

A door breaching sequence occurs, with all other Ghosts soldiers stacked at the door. Logan covers them using the Remote Sniper. Once the team breaches the door, they find no sign of Ajax, however Riley smells the scent of him. Logan, along with Riley and the rest of the Ghosts run down a hallway to search a possible location of Ajax.

Once Ajax is found, he tells them of Rorke's kill list, which is located on the wall. He dies before he can reveal any more information. Hesh finds the paper to the wall, and upon viewing the paper, asks about who Rorke is. Merrick tells him that he doesn't have enough time to explain, and then the team leaves. Ajax's body is carried to the exit of the stadium, where he is picked up by a chopper along with Merrick and Keegan. Logan and Hesh are then attacked by Federation forces. Logan is then tasked with taking out the troops using the remote sniper to secure an LZ for a chopper. After clearing out infantry and vehicles, Hesh, Riley, and Logan are airlifted out of the stadium. As they head to Fort Santa Monica, Elias Walker tells them over radio that its being attacked by the Federation.

A trophy referencing The Legend of Zelda

A trophy referencing the 2012 conspiracy

A trophy referencing Doctor Who 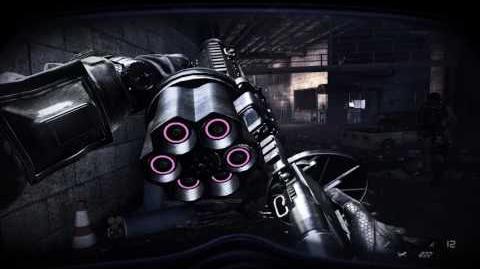 Call of Duty Ghosts Walkthrough - Struck Down (Part 4)
Struck Down
Community content is available under CC-BY-SA unless otherwise noted.
Advertisement