For the vehicle, see Stryker (vehicle).
For a similarly named shotgun, see Striker.

Stryker is the fifth Combat Rig in Call of Duty: Infinite Warfare and is unlocked at level 31. The Stryker rig specialises in area denial tactics and protection of the player's team, such as the Trophy Drone trait, which serves as a portable Trophy System capable of destroying projectiles.

In terms of payloads, the Gravity Vortex Gun is the Stryker's default payload. Shots fired from the Gravity Vortex Gun travel along a straight trajectory until it contacts a surface or until it automatically detonates at mid range. After which, a singularity, similar however stronger than the Black Hole Projector is formed, at which point begins to draw in enemy players within a close proximity, instantly killing those caught in the singularity. Once the duration of the singularity is maxed out, it explodes, dealing splash damage to those in the radius.

The Micro Turret payload, unlocked at level 45, is a turret that is able to placed upon the floor. The turret will target and attack any enemy players that are not using the Blind Eye perk. The Micro Turret specialises particularly in area denial or defending a choke point or area of interest, such as an objective.

The Centurion payload, unlocked at level 52, operates by emitting a strong electromagnetic force similar to a Guardian, as well as destroying nearby projectiles whilst being used. Unlike a Guardian however, the Centurion is able to operate in a full spherical radius, increasing the difficulty to destroy it. The Centurion, similar to the Micro Turret, is capable of area denial or defense of an objective or choke point. 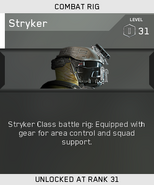 Stryker being unlocked in multiplayer. 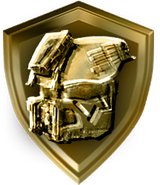