A Stryker Infantry Carrier Vehicle with a remote weapon station appears in the level "Exodus". For it to work, one must "paint" a target with a laser designator, and the Stryker's machine gun will engage by putting suppressing fire on the target. It must be protected from heavy RPG fire. The Stryker in this mission is codenamed Honey Badger, and has been requisitioned by Shepherd from the 8th Armored in order to support Hunter Two-One.

Honey Badger.
Add a photo to this gallery

A Stryker Variant is seen as a prop in the map Afghan.

The Stryker Emblem in Multiplayer.

A Stryker in Afghan.
Add a photo to this gallery

In the Spec Ops mission Wardriving, the player uses a laser designator to 'laze' targets for Honey Badger.

The Stryker returns in Call of Duty: Modern Warfare 3, and can be seen escorting Delta Force through Broad Street in "Black Tuesday". There are multiple wrecked Strykers spread all around New York , and given the looks of the destroyed ones, it can be assumed that they were destroyed by Russian Air support, as there are no wrecked Russian tanks lying around, these wrecked Strykers can be used as very good cover from enemy fire support. The Stryker is also in a much less prominent role as Firefly, Frolic provides little fire support, and "Samaritan" stops after a certain part. All three Strykers have relatively good accuracy, but for whatever reason, Firefly does not suppress the enemy at the barricade, rather just firing, stopping, and then firing again.

The fate of the three Strykers is different from Call of Duty: Modern Warfare 2, as "Honey Badger" survives, whereas "Frolic" and "Samaritan" survive Call of Duty: Modern Warfare 3, but "Firefly" is taken out by a Hind. It is possible that the Stryker's "Samaritan" and "Frolic" went on to fight later on in Berlin and Paris , but it remains unknown.

It is noted that if the player goes off to the far right, and looks carefully, they will see that "Firefly" and "Frolic" are in the area they come from, in frozen form, and they do not move at all, as they are only scripted to move when the player reaches a certain point, also, the soldiers that accompany them are not there, as they will spawn once the player reaches a certain point. It is possible that Infinity Ward and Sledgehammer Games did not want to waste time building a road for the Rangers and Strykers to come down from that would only be seen briefly, and it may also be that the majority of the players would not look in that direction, if trying to complete the level.

Whether the Strykers "Frolic" and "Samaritan" survived the events of Call of Duty: Modern Warfare 3 is currently unknown. 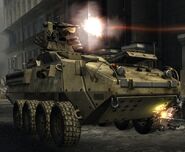 A destroyed Stryker in Modern Warfare 3's multiplayer.
Add a photo to this gallery

Retrieved from "https://callofduty.fandom.com/wiki/Stryker_(vehicle)?oldid=2500044"
Community content is available under CC-BY-SA unless otherwise noted.