This page uses content from Wikipedia. The original article was at Military Assistance Command, Vietnam – Studies and Observations Group.
The list of authors can be seen in the page history.
As with the Call of Duty Wiki, the text of Wikipedia is available under the Creative Commons License.

For the mission with the same name, see S.O.G..
For the knife, see SOG Knife.

"Back in '64, the CIA gave up control of covert operations in Southeast Asia, handed it over to the US Military. From that, MACV-SOG was born."
— Frank Woods

S.O.G. makes their first appearance in the self-titled mission. According to Alex Mason's interrogator, Mason was picked to join the S.O.G. team lead by Frank Woods prior to the mission. During the mission, Woods briefs Mason (accompanied by Special Agent Hudson) on MACV-SOG's creation and purpose, when their base comes under attack by the NVA. The team decides to stay behind and aid the Marines in defending the base, which they do successfully.

The team travels to Hue City where they are given the objective of extracting a Soviet defector from the MACV compound. Mason and Woods are joined by fellow operative Joseph Bowman. Although the defector was killed, Mason acquires his dossier, and the team fight through the city to extraction by boat.

Later, Mason's and Woods' helicopter is shot down by Viet Cong. After escaping the crash and fighting Viet Cong on the river, Woods and Mason sneak into an enemy village where they stealthily kill guards and meet up with Bowman and other operatives. The two split up, with Woods working above water while Mason sets explosives underwater. After meeting up with Bowman and many other SOG operatives, the team detonates the explosives and proceeds to clear the village. The team encounters a "rat tunnel" and Mason and Swift enter to clear it out. Swift is killed, but Mason continued to clear the tunnel and escaped for extraction.

The SOG work with the US Army to attack Viet Cong villages, supporting from boats. Afterwards, they search for a downed Soviet plane which they believe carries Nova-6. Discovering the gas may have dissipated after the crash, they defend the plane from a Soviet attack, during which the team is captured.

The team is taken to a hidden cave in Laos and forced to play Russian Roulette. Bowman refuses, resulting in his death. Mason and Woods conceive an escape plan and escape the cave. They steal an enemy Hind, and use it to wreak havoc on various Viet Cong settlements. After landing, Woods and Mason rescue the POWs from Kravchenko's compound. The group then fights their way to Kravchenko himself, which culminates in the presumed death of Kravchenko.

Mason imagined Viktor Reznov being with him for the majority of the SOG's operations and apparently contacted the CIA informing them of "Reznov"'s presence, as Reznov is in the CIA files as having been the defector who joined the SOG team. However, Reznov was never truly there and Hudson corrected this once he realized that was the case.

In multiplayer, the SOG announcer is Bowman. The MACV-SOG always play against the North Vietnamese Army.

It's confirmed that the SOG symbol on Harper's vest was just a placeholder in Call of Duty: Black Ops II, due to the fact SOG disbanded after the Vietnam War. Harper and David Mason are really members of the United States Navy Special Warfare Development Group as they both wear the same camouflage as the SEALS in Multiplayer.

SOG operatives in a Vietnamese village. 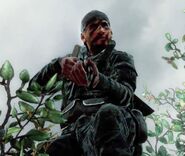 SOG operatives in Hue City on a joint mission with the Marines.

All multiplayer skins from Create-A-Class 2.0

An S.O.G operative holding a Commando with an ACOG sight. 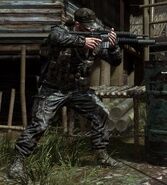 An S.O.G operative aiming a Commando with an M203 Grenade Launcher. 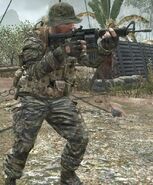 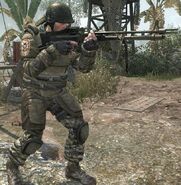 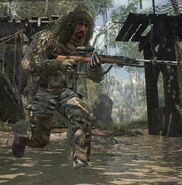 Hudson when he worked with the SOG.

"Execute the mission."
— When the team starts a Team Deathmatch

"Suck it up, the war's not over!"
— When the SOG is defeated

"Get that son of a bitch out of here before I kill him myself!"
— SOG Faction Announcer in Hardcore modes, after a team killer is booted from the match 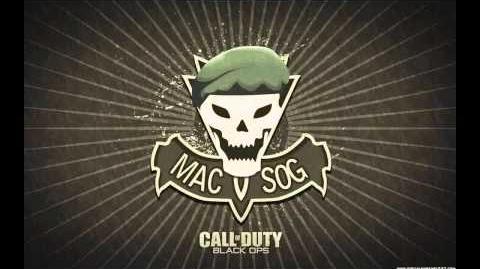