For the tactical grenade with the same effect, see Concussion Grenade.

1 second after hitting the ground

"Device that disorients the target when detonated."
— Special Grenade description

The stun grenade is one of three available special grenades. One is normally given, but the player's inventory of special grenades can be increased to three if the perk Special Grenades x3 is used.

Stun Grenades are thrown much faster than other grenades, making them a better choice over Flash Grenades for not being caught off guard.  Stun grenades also greatly slow targets, unlike flash grenadesHowever, Stun Grenades do not completely blind a player, compared to flash grenades.

Stun Grenades are available in the Assault and Heavy Gunner default classes.

The Stun Grenade does not appear in Old School Mode.

In Call of Duty: Modern Warfare 2, two stun grenades are now given instead of one. Wearing a Blast Shield negates the slowing and blinding effect of stun grenades, giving Blast Shield wearers a significant advantage in indoors fighting. The same benefit is received for the Riot Shield.

The stun grenade makes a reappearance in Call of Duty Online.

A Stun Grenade in mid-air.

The Stun Grenade returns and retains the same purpose from previous games. However, the player can now double tap the Action Button to detonate the stun grenade manually, similar to C4 in previous games. The Stun Grenade can also disable Remote Turrets for a short period of time, allowing most tactical players to destroy Turrets with ease. Players with the Tier 3 Perk, Hard-Wired, however have immunity to the Stun Grenade. 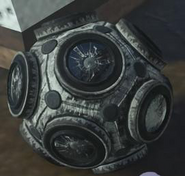 The Stun Grenade returns and retains the same purpose from previous games.