""...You must find a device capable of projecting a powerful sonic blast.""
— Maxis talks about the Subsurface Resonator. 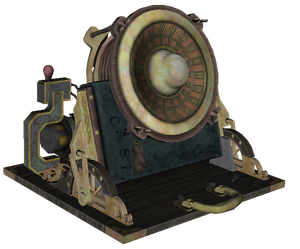 The Subsurface Resonator is a buildable in Buried and Borough for Call of Duty: Black Ops II. It requires a Turbine to function; it blasts a sonic sound that kills zombies and distorts the screen. On zombies at a further distance, it will simply knock them back.

The Subsurface Resonator is needed to get the Death From Below achievement, as well as playing a key role on the Maxis side of the easter egg Mined Games.

All parts are found in the general store near the first Mystery Box spawn.

Found leaning against the wall, to the right of the doorway to the back room, on the main floor.

Found leaning up against the wall opposite of the table, down the hallway, towards the back door of the general store.

Found on a counter before the Weapon Locker.

Found in a corner at the top of the staircase.

The table, adapted from a roulette wheel.

Subsurface Resonator on a workbench