"Mason and Woods join US Navy Seals in the invasion of Panama, on a mission to capture Manuel Noriega."
— Mission description

"Suffer With Me" is the seventh mission in the Call of Duty: Black Ops II campaign, where Frank Woods and Alex Mason are tasked to capture Manuel Noriega and destroy his reputation in order to get closer to capturing Raul Menendez. It is the fourth and final mission set in the 1980s.

This is arguably a major if not the most key level of the game as it seals the fate of Alex Mason (which the player decides), the death of Jason Hudson, and sets up the main event of the game for the player.

On December 19, 1989, a few hours before the midnight attack, Frank Woods and Alex Mason are briefed at Mark McKnight's house about Manuel Noriega, codenamed Objective False Profit, who is dangerously scheming against the government. Alex and Woods get to Panama during Operation Just Cause, the United States invasion of Panama, and capture Noriega successfully but are informed by Hudson that instead of being captured, he will be exchanged for another prisoner. The three make it to the army checkpoint and prepare for the exchange at the Panama Canal.

Mason goes on a building west of the exchange area while Woods goes with Noriega to a building south of that. Woods asks who the prisoner is and is told that it is Menendez. The prisoner is brought out with his head bagged and Woods is told to shoot. Woods can shoot either his head or his body. He does so and when Woods removes the bag to confirm the kill, he notices that the target was Mason and not Menendez. Woods flies into a rage and tries to shoot Noriega, but is suddenly ambushed by Menendez, who shoots off his kneecaps and knocks him out.

Woods awakens to find Alex's body, Hudson tied to a chair and David tied to a pole while in a trance. Hudson admits that he was forced to manipulate Woods, in order to prevent David from being killed. Menendez says that one of the three people must also die, or in ten seconds they will all die.

Hudson at first, hesitates saying that he has two kids, but unwilling to let David or Woods die for what he has done, he immediately tells Menendez to kill him. Menendez shoots Hudson with his shotgun in both of his knees, then slits his throat with the point of Josefina's heart-shaped pendant. Instead of killing Woods too, he leaves while telling him that he will now feel as much as pain as he had when Josefina died. Before he leaves, he moves close to David and shows him the heart-shaped pendent telling him that one day David will see it again, and that when he does, David will remember what happened that night, and will come to Menendez. Then, as Menendez leaves the room, David wakes from his trance, and begins crying when he sees the body of his father, Alex. If he was shot in the body, he can be seen moving his face slightly as David is crying over him, showing that he is still alive.

Menendez does not completely succeed in manipulating Woods 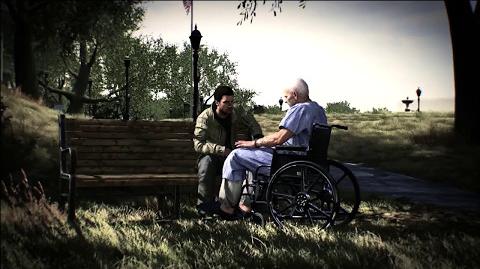 Call of Duty Black Ops II - Suffer With Me

Upon completing 2 challenges, the perk FMJ will be unlocked for the singleplayer loadout. Completing 5 challenges unlocks the FIM-92 Stinger.

M1911 (given by Mason to Noriega and dropped by Friendlies.)

Machete (used by the Batallón Dignidad)

MVP (used by the Batallón Dignidad)

Woods putting on a cap.

McKnight telling Frank and Alex to go around back.

The trio discussing the invasion.

Chasing away the teenagers.

The U.S. Invasion of Panama.

Landing on the beach.

Approaching the Adelina Hotel where Noriega is staying.

Noriega in his room.

Going through a quiet building.

Arriving at the rendezvous point.

Mason shows his ID to an Army Ranger.

Noriega and Woods walking towards the body.