Suicide Bombers will start to spawn during rounds 5-10 (depending on the map). When they are shot, the two C4 charges on their back will automatically become armed and detonate in a couple of seconds. Mortally wounding or killing one will result in a red glow from their bodies, signaling that their C4 is active. Killing one of them will give the player 150 points. They carry USAS 12s and are easily recognizable by their partially orange or blue outfit. They have low health, taking one knife to kill. If the player knifes a bomber while carrying a USAS-12 the bomber will drop far more ammo (several magazines worth). Otherwise, they only have two rounds in the gun regardless of how many they have fired, following a trend consisting that enemy forces only have a third of a magazine in their gun when killed. If a player survives to a high enough round, they can be seen working with every kind of enemy except for lightly armed militia.

Suicide Bombers tend to rush the player and usually don't take cover. Activating the bombs on their vests will automatically cause their allies to run away, allowing a player to lock down an area for a few seconds if they down or kill one of them in a doorway or choke point. Suicide bombers also tend to take cover on higher rounds, but only so they can get close to shoot the player.

Suicide Bombers are also seen in the form of dogs, although they work differently, as they behave just like a regular dog, but with C4 on them.

Suicide Bombers are first encountered after helicopters are introduced in tier 1 maps, and early rounds in tier two, three and four maps. Suicide Bombers will occasionally fire their USAS-12s at a much faster rate than usual to provide suppressing fire on the player, this will happen more often on later rounds.

Suicide Bombers are strictly a rush-and-kill unit, not taking cover except later on during higher rounds such as in the 30+ range for tier one maps, but as early as 15+ on tier two, three and four maps.

In Iron Clad, they attack the player in order to destroy the Pit Boss, Abrams tank, which player needs to protect. Also, in this mission, suicide bombers wear a different outfit than their survival mode counter-parts.

Suicide bombers appear in Vertigo as well, after the player jumps off the hotel roof with the parachute. Like in Iron Clad, they wear different outfits. and unlike Survival mode, Instead of USAS-12's, They use P90's 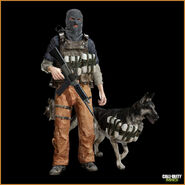 Both kinds of suicide bombers in Call of Duty: Modern Warfare 3

The Suicide Bombers reappear in Call of Duty: Black Ops: Declassified, in Hostiles mode. However, they are called "Close-Range Bombers" instead, and the weapon they carry is randomized depending on the round.

"For our leader! You will die here! For The Wolf!"
— Suicide Bomber quote in the campaign and Spec Ops.

The Suicide Bomber model first introduced in the mission Piccadilly is the one which is mostly commonly encountered throughout the Campaign, with the mission The Embassy being the last mission where this Suicide Bomber model is last encountered in the Campaign. This model can be seen wearing a blue hoodie with the hood on top, a plate carrier suicide vest strapped with bricks of C4 explosives on the front, back, and sides which can be detonated by an radio-controlled detonator held on his right hand. He can be heard with his distinct shouts as he tries to rush towards his intended target before detonating the explosive charges on his suicide vest, killing him and the people who are dangerously close to his blast radius.

The Suicide Bombers throughout the Campaign are not limited to this specific model however, as there are different variants that act like the Suicide Bomber. One example was a male hostage inside the 2nd floor of the Tanto Building in Piccadilly Circus, who unintentionally became a suicide bomber after being strapped with a timed suicide vest wrapped around a case-hardened steel cage which prevented Sgt. Kyle Garrick from defusing the suicide vest. With no time left to defuse the bomb, Captain Price took drastic measures by pushing Kyle out of the way and throwing off the unfortunate hostage from the 2nd floor railing before the bomb explodes, saving the lives of the two SAS operatives and the remaining hostages but at the cost of sacrificing a hostage's life.

Another Suicide Bomber variant was a female Al-Qatala fighter in the level Clean House, who attempted to put Sgt. Kyle Garrick and Captain Price's guard down by pretending to be a hostage by the Al-Qatala fighters inside the townhouse. She was eliminated by either Captain Price or Kyle Garrick before she could reach a detonator on the table to prime the explosives in the room.

A suicide bomber is also encountered in the level Highway of Death, but this time he is riding an armored bomb truck, charging towards the village where Alex, Farah and Hadir are lying in wait along with a few ULF fighters to ambush Omar "The Wolf" Sulaman. The driver, however, was shot by Alex, losing control of the vehicle until finally crashing and detonating its explosive from a safe distance away from the village.

Two suicide bombers were encountered in the level The Wolf's Den. The former attempted to attack Alex and Farah when they entered the tunnel that leads to Omar Sulaman's underground base. His efforts were unsuccessful as it only blocked the entrance to the tunnel, cutting off Alex and Farah from the rest of the team. This forced the two into pushing through the tunnel to hunt down The Wolf and for a way out. The latter was none other than Omar Sulaman himself, as he makes his last stand by blowing himself up along with Alex and Farah. He was eventually shot by either Alex or Farah before he could manually detonate his suicide vest manually with his detonator. As a last-ditch effort, a timer on his vest is installed should he fail to detonate it manually, but this was successfully disarmed by Alex and Farah.

The model of the Suicide Bomber from the campaign missions Piccadilly and The Embassy were reused in Special Operations, where they are encountered in Operations mode levels: Paladin, Brimstone, Strongbox, Just Reward and Harbinger. They can also be encountered when playing Survival Mode in some maps such as Talsik Backlot, Atlas Superstore, Grazna Raid, Aniyah Palace, Crash, Hovec Sawmill, and Piccadilly.