Call of Duty Wiki
Register
Don't have an account?
Sign In
Advertisement
in: Stub, Call of Duty: Infinite Warfare Traits

Supercharge is a trait for FTL in Call of Duty: Infinite Warfare that is unlocked at level 15. It causes enemies killed by the player to drop cooldown packs that, when picked up by a teammate or the player themselves, will decrease the amount of time it takes for the Payload to be ready. This can be combined with short-metered payloads such as the FTL Jump, or with weapon variants that give bonuses to payload meters to allow players to charge them much faster, and faster still when playing the Hyper Team Deathmatch mode. 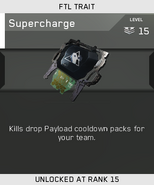 Supercharge being unlocked in multiplayer.
Community content is available under CC-BY-SA unless otherwise noted.
Advertisement