In Call of Duty: Advanced Warfare, Supply Drops are given to the player in different ways, including time played.

It can give out character gear, reinforcements, and weapon variants. Weapon variants are customized weapons that modify the base stats of that weapon. Most weapons have about ten variants (some exceptions are the CEL-3 Cauterizer, the MP40 and STG-44), which change the aesthetics as well as the stats. Character gear modifies the player's character and Exoskeleton, similar to Create-A-Soldier. Last, Reinforcements are items, including Perks and Scorestreaks, that are dropped into a multiplayer match at predetermined times by an Orbital Care Package.

Supply Drops are acquired every 45 minutes of in-game gameplay or purchased as Advanced Supply Drops from the in game store. They will be received upon either getting a kill or a death. Some ways are from earning XP, time spent playing, or earning medals. They can be earned not just in multiplayer, but also Exo Survival and the campaign. However, they are all items for multiplayer.

Supply Drop weapons can appear differently from the base gun, ranging from simple color changes to completely new barrels, iron sights, or other exterior changes to the weapon. However, the only difference in function is reflected by the stat changes. Selecting a camouflage on a Supply Drop weapon may not entirely overwrite the unique colors. Some parts will still be visible in the base color.

While some Supply Drops change magazine capacities, total ammunition remains the same (unless there's a change in the number of magazines available), as well as the maximum reserve ammunition remaining the same.

Supply Drop weapons can be used in Private Match. However, the base weapon must be unlocked before the variants can be used. The same goes for weapon variants: they cannot be selected until the variant has been acquired through a Supply Drop. Both weapon variants and Supply Drop weapons cannot be selected in Create-A-Class or when customizing default loadouts in Local multiplayer, but sometimes can be picked up from bots.

Some Supply Drop weapons also appear in the campaign, where they are used by the juggernauts of Atlas. The Bal-27 is the Carbon variant, the Ameli is the Swift variant, the Tac-19 is the Runner variant, the Atlas 45 is the A1 variant, and the KF5 is a slightly altered version of the Single Stack variant.

Supply Drops return in Call of Duty: Black Ops III. They can be acquired through the Black Market feature in Multiplayer only on Xbox One, PlayStation 4, and PC.

There are two types of supply drops: Common Supply Drops (costing 10 Cryptokeys), and Rare Supply Drops (costing 30 Cryptokeys or 200 COD Points). Supply drops can give out specific camouflages for weapons, Calling Cards, taunts and gestures for specialists, variants of attachments and exclusive weapons (including melee weapons such as Wrench and ranged weapons such as MX Garand). Most items are cosmetic, though the exclusive weapons have statistical differences to those available through ranking up. Many of the weapons are somehow unique and have a defining feature compared to the conventional weapons, or throwbacks to player favorites in previous Treyarch games.

Weapons obtained from Supply Drops, just like in Call of Duty: Advanced Warfare, can only be used in online Custom Matches if the player has obtained the weapon from a Supply Drop, and cannot be used in Local multiplayer either until acquiring them in online multiplayer.

As of update 1.04, the player can burn duplicates of items that they already had for a partial refund on cryptokeys.

As of another update, players who own the Season Pass on PC, PlayStation 4 and Xbox One received a ten-pack bundle of Supply Drops, as well as a special Supply Drop which is guaranteed to give the player a Supply Drop-exclusive weapon.

The triple play bundle can be purchased with CODPoints, when aquired, the offer grants players a no dupe ranged weapon bribe, no dupe melee bribe and a bundle of 10 rare supply drops. A contract 'Triple Played' provides the player with same rewards after getting 100 wins.

The big box bundle contains a 100 pack of rare supply drops at the highest discount price of *75% off. (*Based on the price of a regular rare drop) Only purchasable using CODPoints at a cost of 5000CP.

A contract with a similar name, the 'Grand Slammed' was made available between Sep 4 - 11, 2017 with the requirements of winning 125 games to obtain the reward.

The purchase screen on the Black Market

A drop opening with one Rare and two Common items

A drop opening with Rare, Epic and Legendary items

A drop opening with a Limited item

Supply Drops return once again in Call of Duty: Infinite Warfare. Just like in previous titles, Supply Drops contain multiplayer loot such as customization options, weapon variants, and calling cards. They are available from the Quartermaster. Duplicate gear earned is recycled for Salvage, able to be used to purchase weapon variants known as Prototype Weapons. 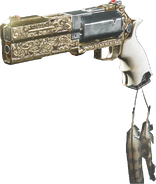 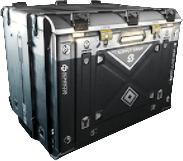 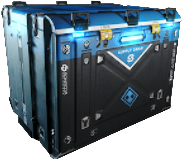 The Rare Supply Drop being earned from a supply drop.

The rarity associated with the qualities are synonymous with the Call of Duty: Black Ops III version: 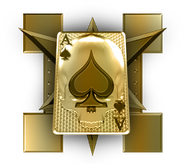 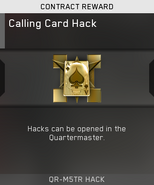 On January 11th, 2017 (PS4 and Xbox One)[4] and January 18th, 2017 (PC), an update was released that added MKII Variants of all weapons that can be bought with Salvage to the game. MKII variants function identically to their normal variants, however with three main exceptions - MKII variants award a bonus 15% XP per kill, they can only be obtained from Supply Drops and they cannot accept camouflages in customization. MKII variants can be noted by a moving hexagonal camouflage on the weapon that reflects the quality of the weapon. Weapons exclusively available from promotional means (such as the Hailstorm Thunder variant obtained by playing Call of Duty: Black Ops III) do not have a MKII variant. MKII variants are given their own unique supply drop card to distinguish from their regular counterparts.

The Reaver Skiver variant in a MKII appearance.

Free Supply Drops were available for 12 days starting from December 21st, 2016 to January 1st, 2017[5]. Only one supply drop was given per day. The contents of those 12 supply drops were:

The 12 Days of Winter gifts.

String 'Em Up calling card given on Day 1.

Titan Slay Guide given upon Day 8.

Quartermaster Hacks are special event items available from the Quartmeraster that guarantee a specific item when bought, such as the Prototype Hack, which guarantees a MKII weapon variant of Rare quality or better.

The Prototype Hack guarantees a MKII weapon variant of Rare quality or better when purchased. The Prototype Hack was available for purchase from March 10th, 2017 to March 13th, 2017, and costed 45 Keys or 300 CODPoints to use.[6]

Bundles are another assortment of special event items available form the Quartermaster that offer specific deals when purchased, such as the Triple Play Bundle, which includes 10 Rare Supply Drops, a dupe-protected QR-M5TR collection drop, and a dupe protected MKII collection drop.

Supply Drops return once again in Call of Duty: Modern Warfare Remastered. Just like in previous titles, Supply Drops contain multiplayer loot such as; customization options and melee weapons. They are available from the Depot

Items available through Supply Drops are primarily cosmetic, including:

Every item is also part of a Collection. Completing a Collection earns a Bounty, which awards an exclusive new item based on the Collection’s theme. The quality of the bounty items is simply Bounty.

Parts can also be earned through supply drops and trading in duplicate items. These parts are used to buy items within collections and unlock their bounty.

Supply Drops return in Call of Duty: WWII. Just like in previous titles, Supply Drops contain multiplayer loot such as customization options and weapon variants. They are available to open in the Headquarters, in which payers spectating supply drop openings can earn 750 XP, Social Score or more supply drops. If a player's supply drop opening is spectated by others, they will also earn a small amount of Social Score.

Items available through Supply Drops are primarily cosmetic, including:

Every item is also part of a Collection. Completing a Collection earns a Bounty, which awards an exclusive new item based on the Collection’s theme. The quality of the bounty items are Epic.

Armoury Credits can also be earned through supply drops and trading in duplicate items. These parts are used to buy items within collections and unlock their bounties.

The rarity associated with the qualities are synonymous with the previous three iterations, however with the inclusion of a supply drop exclusive Heroic quality, that supersedes the Epic quality.

When a player earns an Epic or Heroic item from a supply drop inside the Headquarters, a message appears in the HUD notifying everyone in the Headquarters of the opening.

After The Resistance event, Heroic Supply Drops were added, guaranteeing players one Heroic weapon variant. Heroic Bribes are marked by a black crate.

A Soldier XP boost earned via a supply drop

A duplicate supply drop card before The Resistance event.

During the The Resistance event, players were also able to earn Resistance Supply Drops and Resistance Bribe Supply Drops, similar to the previous Winter Siege event. Five separate collections were able to be completed before the event's end. 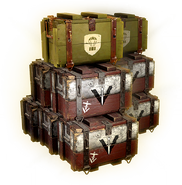 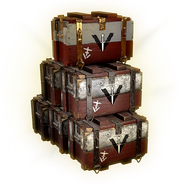 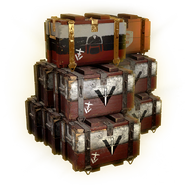 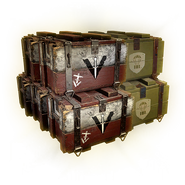 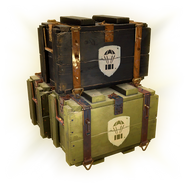