The Swiss K31 is a straight pull bolt-action sniper rifle that was added to Call of Duty: Black Ops Cold War as part of the Season Three content for the game.

The Swiss K31 can be brought into any map via Create-A-Class, at Loadout rarity. It was added to the Mystery Box and Trials rewards pool as part of the Season Three: Reloaded update. When upgraded via the Pack-a-Punch Machine, it becomes the Swiss KH3353.

For the weapon with camouflages, see Swiss K31/Camouflage.

The Swiss K31 in first person. 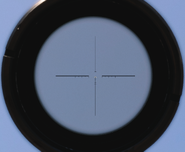 The default scope of the Swiss K31.
Community content is available under CC-BY-SA unless otherwise noted.
Advertisement