Call of Duty Wiki
Register
Don't have an account?
Sign In
Advertisement
in: Call of Duty: Black Ops 4 Submachine Guns

The Switchblade X9 is a submachine gun that was added to Call of Duty: Black Ops 4 with the Operation Grand Heist update. It is described as a suitcase weapon used for heists due to its folding and compact design.

In order to make the best out of the weapon, attachments such as the Hybrid Mags and Stabilizer will help the weapon increase its ammo size and reduce sway if the player attempts to use the Switchblade X9 at longer ranges. The Grip can also help reduce recoil, and the Laser Sight will help improve the weapon’s hipfire accuracy.

The Switchblade X9 is available from the Mystery Box on all maps for 950 points, while to be customized, it requires the player to have unlocked the weapon itself. When upgraded via the Pack-a-Punch Machine, it becomes the eXcise n!n3f0ld, gaining an increased base magazine size of 40 and a reserve count of 400. In the early rounds, the Switchblade X9 can be useful for building up points, but will begin to require a multitude of bullets in order to kill a zombie in the higher rounds.

The Switchblade X9 in first person

The Switchblade X9's Message of the Day description

Concept of the unfolded model.

Concept of the folded model. 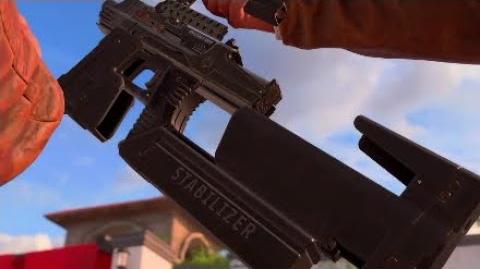