"What once was sundered and undone has been made whole, the three made one."
— Drostan Hynd

The Sword of Barbarossa is a mystical blade that was forged in ancient Thule. It would fall into the possession of German holy Emperor Frederick Barbarossa during the Third Crusade. Following Barbarossa's death, the sword was broken into pieces and scattered across Europe.

At some point in history, the sword was forged in Thule, imbued with a strange energy which would later be named Geistkraft. Sometime around the Second Crusade, the sword would be claimed by Frederick Barbarossa from Deception Island in Antarctica after his disastrous attempt to presumably combat the Turks, who would use the sword to rise through the ranks of the Holy Roman Empire hierarchy.

Following Barbarossa's unexpected demise at the Saleph River in Cilician Armenia, the sword was disassembled, and each of the pieces would be scattered across Germany.

Discovery of the Hilt

During World War II, the hilt of the sword was discovered in a chamber within the salt mines of the sleepy mining town of Mittelburg. Klaus Fischer, a worker at the mines, was convinced that he could present the hilt to Hitler to prove his worth. After using his connections to contact the Nazis, the Ahnenerbe eventually arrived in the village, and Klaus was introduced to Doctor Peter Straub, whom he then took to the mines to present the hilt. Straub then put Mittelburg on lockdown, and prevented all residents from leaving.

While trying to remove the hilt, the Nazis discover that the hilt is protected by a strange magnetic force. Despite this however, the Nazis were able to find a way to siphon energy from the hilt, dubbing said energy "Geistkraft". During an early experiment to draw power from the hilt, a cable overheated and snapped, striking two guards and instantly killing them. However, they soon began to violently twitch and reanimate before getting up and walking towards a surprised Straub with the intention of killing him. However, more guards arrived and put the two down. Following this incident, Straub soon discovered the key to completing his task of creating an army for Hitler, as well as a vision of the latter's future. Utilizing the geistkraft energy from the hilt, Straub was able to create a vast army of the undead, while one of his associates Heinz Richter was able to create various weaponry with the energy, such as the Tesla Gun and its variants with the use of special Überschanlle batteries.

However, tensions rose between Straub and Richter when the latter sought to use the geistkraft energy for more weapons. While this happened, Klaus, who became aware of Straub's true intentions with the power of the geistkraft energy from the hilt, decided to begin to sabotage Straub's work. While he did this, he discovered that the art within the chamber told a story, one that told the true reason why the sword was separated, as well as a secret organization that was dedicated to keep the history and powers of the sword hidden and out of the hands of anyone else.

Recovery of the Hilt

Sometime later, Klaus finally released the undead onto the town to put an end to Straub's evil. Before he could release Straub's most powerful zombie, the Panzermörder, Straub caught him. As punishment, he fused Klaus with the beast before going into hiding while Richter manned a zeppelin in the skies above the city to get away from the developing situation. Soon later, an MFAA team consisting of Klaus' sister Marie, as well as Drostan Hynd, Olivia Durant and Jefferson Potts arrives at the city thanks to intel given to them by Klaus. They manage to search through the town, discovering the research bunker and the hilt of the sword still in its chamber. After a series of trials, the group manages to break the magnetic force around the hilt with the use of the Tesla Gun, as well as the Rabenherz, a mysterious crystal that is part of the sword's hilt. Upon attaching the two pieces together and regrouping on the surface level, they find Klaus fused to the Panzermörder. After a long battle, the group is able to defeat the Panzermörder by placing three charged Überschanlle batteries on it, causing it to be pulled to Richter's zeppelin via a magnet. In a desperate attempt to escape, the Panzermörder accidentally zipped a hole in the zeppelin, causing it to explode, killing the beast, Richter and Klaus in the process, with Klaus' body landing in front of the group at the Riverside. However, the group accidentally discovers the special power that the complete hilt holds; the power of resurrection. They proceed to accidentally partially-resurrect Klaus, who realizes what Marie has done and lashes out at her and the others for their actions before straggling into the village, constantly rambling about voices and darker forces before reaching the well trap. Klaus then warns the group to continue fighting, and that the Emperor must not return, before activating the trap, engulfing himself in flames.

Discovery of the Pommel

A few days following the mission at Mittelburg, the four MFAA agents, along with an allied squad of American soldiers, were sent to intercept Straub at his island fortress in Heligoland. However, all of the allied soldiers would die, leaving only the MFAA agents to fend off against Straub's undead army.

After searching the island and unlocking Nerthus' sacrificial chamber, the four complete a series of rituals, which would reveal the pommel of Barbarossa's sword from a part of the statue of Nerthus. The four would utilize the pommel in their quest to destroy Heligoland, which had the ability to create an energy bubble which could kill zombies caught by the initial blast and ending blast. As the Royal Air Force bombed Heligoland, the four MFAA agents escaped the island with the pommel in hand by stowing aboard Straub's zeppelin army as it moved its way towards Berlin.

During the trip, Drostan Hynd would continue more of his notes on the Raven Lords and the sword, as well as some of Heligoland's dark history.

After dropping into the streets of Berlin, the four MFAA agents ultimately uncover Barbarossa's Refuge, a secret chamber within the large church with the use of three special melee weapons. After solving a complex statue puzzle and placing four golden raven statues in certain places on the statue of Barbarossa, the seal to the Blade of Barbarossa is broken, revealing the sword within the statue's sword itself. With the blade, the four agents would be able to free themselves from Barbarossa's Refuge, discovering the blade's special arc attack.

Following the deaths of both Straub and his Stadtjäger, the four MFAA agents hold off against the undead at the Cabaret, with Drostan utilizing the sword in the fight. After the unexpected appearance of a Meistermeuchler, the heroes prepare to engage it until Hank Rideau arrives in a jeep, crushing the beast. The four agents board the jeep, with Drostan using the sword to cover their escape from Berlin.

With all three pieces of Barbarossa's sword, the Bureau of Archaic Technologies attempted to reforge the sword pieces themselves, but to no avail. However, upon discovering increased Nazi activity at Deception Island in New Swabia thanks to Operation Highjump, the Bureau realized that the island was in reality Thule, the only place where the sword could be reforged. The Bureau soon embarked on a long journey across the world, eventually reaching Thule.

After restarting the forge, the four MFAA agents were able to forge the sword pieces together, ultimately restoring the Sword of Barbarossa.

A weapon of mysterious powers, the sword is shown to be powered by a special type of energy dubbed Geistkraft. This energy can be used in various ways, such as to resurrect the dead, as demonstrated during an early experiment and when the MFAA accidentally used the hilt to partially-resurrect Klaus. The energy is also used to create special weaponry, such as the Tesla Gun, as well as the Überschanlle batteries, which are key to upgrading the Tesla Gun even more. As explained by Straub in his recordings, the Geistkraft energy from the sword can be used to trigger the most primitive parts of the human cerebellum, as well as preserve the undead and drive them. Straub also discovers that by triggering the pain receptors of the corpses with the energy, he can augment the zombie's strength and speed and ultimately create an undead army at his disposal.

As hinted by Klaus, if the sword is fully restored, its powers could ultimately fully resurrect the Emperor himself.

Once all three sword pieces were collected by the MFAA and the B.A.T., the sword pieces would not forge together with any sort of modern utilities, such as high amounts of pressure, heat, or molten steel. Marie then claimed that the sword's base material was a magnetic monopole, and with research backed by Drostan Hynd, discovered that the sword could only be forged together with the mysterious powers of Thule, which was revealed to be at Deception Island within New Swabia, a region of Antarctica.

Some of Drostan Hynd's notes on the blade.

The hilt of the sword with the Rabenherz crystal in it.

The MFAA's briefing on the chamber containing the hilt of the sword. 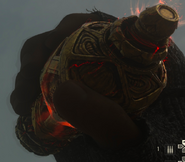 The pommel of the sword.

The blade of the sword. 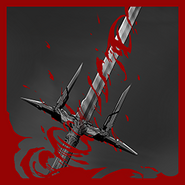