When using the T.H.O.R., the player's perspective is instantly switched to viewing the battlefield from a bird's eye view. The player has two firing modes - a controllable four missile firing mode or a singular uncontrolled firing mode, similar to the Trinity Rocket. The uncontrolled missile fire mode does not, however, lock on to players. The player can launch four rockets before the T.H.O.R. needs to reload, meaning the first firing option can be fired once or the second option can be fired four times. The T.H.O.R. is also equipped with thrusters that allow it to evade missiles or attack from a different angle. 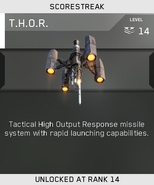 The T.H.O.R. being unlocked in Multiplayer.