For other variants, see MTAR and MTAR-X.

In the campaign, it is used heavily by the Russian military and Task Force 141. It is available in all missions involving Russian Ultranationalists and members of Task Force 141. In the campaign and Special Ops, this weapon is always seen with optics attached. It can be fitted with a regular Red Dot Sight, unlike in multiplayer, the MARS Sight, Holographic Sight, ACOG Scope and Thermal Scope.

The TAR-21 is unlocked at level 20 in multiplayer. It uses a 30 round magazine. Unsuppressed, it deals 40 damage at close and medium range, and 30 at long range. Suppressed, the 40 damage only applies at close range. Therefore, without Stopping Power, it kills in three to four shots, unless shooting through cover or at enemies using Last Stand, Final Stand or Painkiller. Stopping Power reduces this to a two to three shot kill.

The TAR-21 is a very powerful weapon; it has the second highest damage per second among assault rifles, boasting high damage and a high rate of fire. The TAR-21's DPS is rivaled only by the FAL and burst fire weapons, as well as the F2000 with Stopping Power. Its advantages, however, are mitigated by its moderately high recoil compared to most of the assault rifles. However, this can easily be remedied by burst-firing where necessary.

The TAR-21 has a moderate reload speed at 2.5 second partial reload and a 3.15 second empty reload. This may make Sleight of Hand necessary for some who are bothered by the reload speed, but other players may prefer Scavenger, especially on classes that don't use Stopping Power and thus take more shots to kill. It is also possible to shorten the reload to two seconds by reload canceling, which again can make Scavenger all the more useful.

The TAR-21's iron sights are clear, but can be off-putting due to the large ghost ring. In multiplayer, the Red Dot Sight attachment is replaced by the MARS Sight, which uses a much smaller, circular frame instead of the standard Red Dot Sight. It is bulky when not aiming down it and reflects light, which can sometimes make aiming difficult. However, using a MARS sight along with a Heartbeat Sensor is useful as aiming down the sights gives the player the largest view of the sensor of any weapon.

In Hardcore game modes, the TAR-21 is capable of one shot kills without Stopping Power, unless firing through cover or at a player using Last Stand, Final Stand, or Painkiller. This combined with its high rate of fire makes it very useful for engaging several enemies at once.

The TAR-21 in first-person. 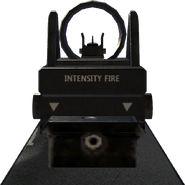 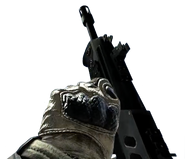 The TAR-21 with a Holographic Sight, Silencer and Urban Camouflage in third person.

The TAR-21 was cut from the game, however, textures and unused menu icon can be found in game files. 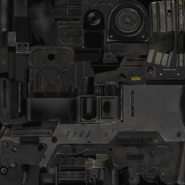 The TAR-21 was available in an early build of the game, but was cut from the final version, having been replaced by the MTAR. It can also be seen on the icons of the Secondary Gunfighter wildcard and the Gun Nut achievement/trophy.

The TAR-21 in an early build of Black Ops II, with the killfeed icon for TAR-21 in the left

Pick-up icon seen in the middle

The TAR-21 on the icon for Secondary Gunfighter

The TAR-21 on the icon for Gun Nut

"A fully automatic bullpup assault rifle with a compact design that lends itself to close-quarter engagements."
— Description

The TAR-21 was added to Call of Duty: Modern Warfare as the RAM-7. It is manufactured by XRK.

Previously unlocked through the Season 1 battle pass, the RAM-7 is now earned by completing a challenge which can be done at any level. It comes with average damage for an assault rifle with a 4-6 shot kill to the body. This can be lowered to 3-4 shots with headshots. The RAM-7 has a high fire rate of 882 RPM. This is second only to the M13 in the assault rifle class, and the RAM can kill in 1 less shot to the body than the M13 in close quarters. This gives the gun a fast time-to-kill at close-midrange compared to other assault rifles. The 4-shot kill range is 30 meters, and past 43 meters 6 shots will be needed. This decent range combined with the high fire rate makes the gun lethal out to midrange.

The RAM-7 also comes with fast handling for its class. Base ADS time is among the fastest in its class, and the same applies to the movement speed and ADS strafe speed. Hipfire spread is average but workable thanks to the high fire rate and reasonable damage output. These traits make the RAM quite mobile and deadly in smaller areas. Although it doesn’t have the fast sprintout time of an SMG, it is still more maneuverable than many other primary weapons right out of the box. The RAM’s magazine capacity is 30 by default. This can be expended quickly under automatic fire, and reload speed is subpar for its class. It also has a fairly high and unusual recoil pattern. For the first few shots, the RAM bounces upwards before drifting up and strongly to the left under sustained fire. This recoil pattern is manageable in close quarters but can prove troublesome at long range. Overall, the RAM-7 allows for great mobility and solid damage output but suffers from moderately high kick and frequent reloading that might warrant attachment slots to fix.

Speaking of attachments, the RAM features a healthy complement of attachments typical for an assault rifle. The FTAC 13.5” Compact barrel will slightly hamper long ranged effectiveness but slightly boost ADS and move speeds. Conversely, the FSS Ranger barrel will grant significant bonuses to damage range and recoil control but will noticeably slow down the gun's handling. The FORGE TAC Eclipse sits in the middle, providing a moderate damage range increase with only a minor ADS penalty. Given the RAM can struggle over longer sightlines, the Eclipse barrel can often be worth considering as midrange effectiveness will be bolstered without compromising the gun’s snappy handling.

Most other attachments perform as expected. Attachments that boost ADS speed like the XRK Close Quarters Stock can make the RAM even more snappy and fearsome in tight spaces. A 1mw or 5mW Laser will help improve the gun’s hipfire and provide additional responsiveness in close quarters. Alternatively, a Compensator or other attachments that improve recoil control or recoil stabilization can reduce the weapon’s hefty recoil for more accuracy. Combining this with an optic can help round out the RAM’s midrange performance. A Tactical Suppressor is also an interesting choice. The weapon’s fast handling can handle the minor ADS speed penalty and make for a deadly silent killer. Finally, the RAM’s reload issue can be rectified with a 50 Round Mag or Sleight of Hand. The former lessens the need to reload and provides extra reserve ammo, while the latter provides a boost to reload speed with no negative consequences.

The RAM-7 in first person. 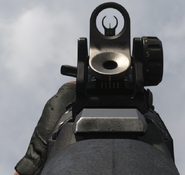 The default Iron Sights of the RAM-7.