For other uses, see Tac.

The Tac-45 (referred to as FNP-45 in the beta and game files) is a semi-automatic handgun featured in Call of Duty: Black Ops II.

The Tac-45 can be selected in the customized loadout. Raul Menendez and DeFalco will use Tac-45s in the final confrontation of "Judgement Day". It is also used by the ISI as sidearm in the campaign mission "Fallen Angel" and can be picked up by the player.

The Tac-45 is the second handgun unlocked after the Five Seven. It boasts high damage, low to moderate recoil, and medium range. Compared to the Five-seven, the Tac-45 does have higher recoil and half the magazine size, but its two-hit-kill range is four times the length of the Five-seven's.

Due to the longer effective range, Long Barrel is a good attachment as it increases the Tac-45's two-hit-kill range, as well as the overall range of the weapon. The Suppressor is not a particularly good choice however, as even though it decreases the range by only 10% (lesser in previous Call of Duty games), it decreases the Tac-45's crucial two-hit-kill range, the key advantage this weapon has over other pistols. Good attachment choices for the Tac-45 are the Extended Clip or Fast Mag due to the smaller default capacity of 10 rounds, Dual Wield for the increased killing ability, Long Barrel, or perhaps the Tactical Knife as it provides a close range back up when needing to reload. The Tactical Knife also changes the visual recoil of the Tac-45 when aiming down the sight.

As the Tac-45 possesses the same damage and firecap as the FAL OSW at close range, it is very rewarding for accurate players due to its extremely fast time to kill, and yet its magazine size, reload, and recoil are decent enough to make it fairly forgiving compared to high damage handguns such as revolvers from previous titles.

The Tac-45 in first person 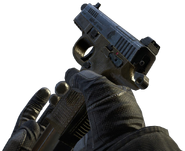