Tac Resist is featured in Call of Duty: Ghosts. It reduces the effects of tactical grenades, similar to Tactical Mask. It is capable of countering 9-Bang, EMP, Concussion and Thermobaric Grenades. It will also remove the effects of the Ground Jammer.

Tac Resist returns in Call of Duty: Infinite Warfare. It lets players have increased resistance to flash and stun effects. It is unlocked by default.

This perk directly counters the Jammer Grenade's stun effect, the Cryo Mine, the Blackout Grenade and the melee stun effect. 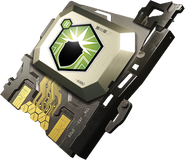 Tac Resist inspect model in Create-a-Class.
Add a photo to this gallery
Retrieved from "https://callofduty.fandom.com/wiki/Tac_Resist?oldid=2369542"
Community content is available under CC-BY-SA unless otherwise noted.