"Enter code at HARDEES.COM/CALLOFDUTY for a chance to win over 2 million prizes and exclusive Black Ops III in-game, limited edition tactical gear, and the grand prize of an ultimate tour of Treyarch Studios."
— The Call Of Duty: Black Ops III Sweepstakes Reward Sticker

Take Out Camouflage is a limited edition weapon camouflage featured in Call of Duty: Black Ops III. It was added on the game on November 5th, 2015.

This camo features a mustard yellow covered with splatters of ketchup and slices of pickles. It covers only some weapons fully.

The code and in turn, the camouflage has expired and is currently unobtainable. 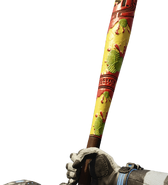 Retrieved from "https://callofduty.fandom.com/wiki/Take_Out_Camouflage?oldid=2511525"
Community content is available under CC-BY-SA unless otherwise noted.