For the perk in Call of Duty: Ghosts, see Takedown (perk).

No Russian
Cliffhanger (if No Russian is skipped)

Capture Rojas' right-hand man alive.
Fight to the top of the favela and capture Rojas. 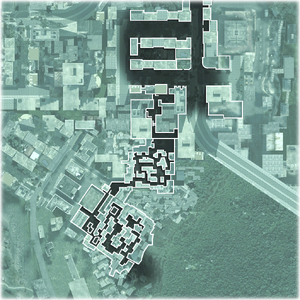 "Takedown" is the fifth campaign mission of Call of Duty: Modern Warfare 2 and Call of Duty: Modern Warfare 2 Campaign Remastered (or the fourth if the mission "No Russian" is skipped). In the aftermath of "No Russian", Task Force 141 finds evidence of the arms dealer who supplied the attack, Alejandro Rojas, in Rio de Janeiro, Brazil, protected by the local militia. Initially unaware of his location, Task Force 141 eventually gains information on Rojas' whereabouts by capturing his assistant, and move in to take him down.

General Shepherd sends Task Force 141 to capture Alejandro Rojas, the supplier for Makarov and the massacre at Zakhaev International Airport, which caused the Russian invasion of the U.S for its involvement in the attack.

Having followed two militia members, Task Force 141 finds Rojas' assistant. The assistant guns down the two militamen before shooting at the car Roach and Soap are in, killing the driver. Soap, Ghost, and Roach chase the assistant into an alleyway, and under Soap's orders, Roach fires on the assistant's legs, crippling him before he could escape into the favela.

Soap and Ghost begin their interrogation of the assistant, tasking Roach, Meat and Royce to search for Rojas in the favela. When they arrive, Meat fires warning shots, telling the civilians to hide. The gunfire also prompts the militia to come out and engage the group, believing that the police have come to finish them off. Battling through the low-level favela, Meat and Royce are eventually killed by the militia, leaving Roach by himself.

Soap informs Roach that they have learned of Rojas' location, and they are on their way to apprehend him. Roach will not have backup, as there is no time to call for reinforcements. Roach battles his way to the upper levels of the favela, narrowly avoiding RPG fire. Ghost and Roach have several opportunities to incapacitate Rojas, but Soap does not allow it, as it is too risky. The three continue to cut off Rojas' means of escape, and when Rojas seems like he is about to get away, Soap tackles him onto a car. Ghost calls Command for extraction, but is unable to due to the war, feeling that they have been left behind.

Intel No. 4
Add a photo to this gallery

Retrieved from "https://callofduty.fandom.com/wiki/Takedown_(mission)?oldid=2523366"
Community content is available under CC-BY-SA unless otherwise noted.